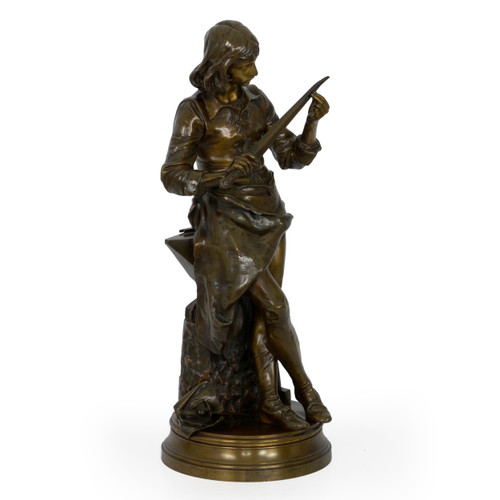 An exceedingly well-cast model of a blacksmith's apprentice assessing a damaged sword, the technical precision of the foundry work is notable. There is a complexity to the lost-wax model that extends to the patination, utilizing a nearly gold in the flesh of the figure while employing a mixture of brown and coppery hues with hints of black in the garment and accessories. There is a studious seriousness in the thoughtful gaze of the young man as he rolls the wavy blade in his fingers. Strewn at his feet are the designs for another blade as well as a finished sword and a blacksmith's hammer resting against the stone base for his oversized anvil; a pair of tongs are rested on the top of the anvil, as he leans against this to ponder his next project.

The sculpture was cast by Usines Vojave in Bruxelles, the foundry mark cast into the stone base of the anvil along with the signature.

Inordinately fine and precise, this is an intelligent and moving study of a young craftsman, a maker and designer.

ADRIEN-ETIENNE GAUDEZ (FRENCH, 1845-1902)
Born in Lyon in February of 1845, Adrien-Etienne Gaudez enrolled at the Ecole des Beaux-Arts in 1862 where he studied under François Jouffroy. He debuted at the Paris Salon only two years later and continued exhibiting from 1864 through 1889, winning a third class medal at the Salon of 1884 and the first class medal in 1881. He was awarded the Legion d'Honneur in 1883. He also won gold medals at the Exposition Universelle of 1889 and 1900. Many of his works are held in major museums around the world including Valence, Louviers and Clermont-Ferrand.

Condition Report:
Tip of the sword has some cracking in the back where it may have been curved a bit too much; one arm of the sword guard in the figure's hand is broken off, perhaps an intentional emphasis of the "damaged sword", but we haven't found images of the same cast to compare Gaudez's original intent with this. Variation to the patina throughout from handling, light wear and minor scuffing. Sculpture has been cleaned, waxed and polished - in a fine presentation-ready condition.