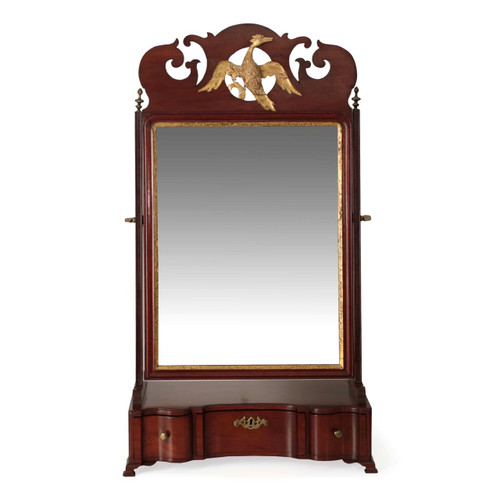 A fine surviving example remaining in exquisite original condition, this dressing mirror was probably crafted in Philadelphia during the last years of the 18th century.  The selection of timbers in the chest portion of the body is noteworthy, these with vivid flowing grains that emphasize the undulating curves of the front.  This is not a veneered case, but rather is scroll cut from solid planks - the drawers show precise hand cut dovetailing with poplar bottoms recessed into the sides of the drawer; the underside of the case is yellow pine.  At some point during the late 19th or early 20th century the glass and backing were replaced, probably around the same time the body was beautifully restored.  The scrolling of the crest is highlighted by a gilded flying phoenix.

This is an exceptional find for passionate collectors of fine early American furnishings and decorative arts - particularly for the client with a serpentine chest that would match the mirror as would originally have been intended.  These were often built en suite for a specific piece of furniture so that the bracket feet and curvature would compliment or enhance the curves of its’ accompanying chest of drawers.

Condition Report:
Beautifully refinished.  Old cracks and accompanying restorations to the crest, minor regilding to portions of phoenix.  Middle drawer bottom replaced along with small sliver of its’ box side; knobs and hardware appear to be original.  Glass and pine backing appear to be 19th century.  No key.  Back left foot replaced, tiny sliver of toe on back right foot spliced.