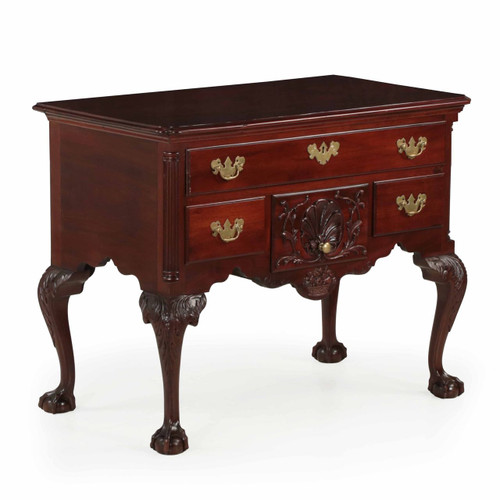 An attractive benchmade lowboy in the Chippendale style after the originals of Philadelphia, this example is probably crafted at the turn of the century.  A nice dense Cuban mahogany is utilized throughout all of the primary surfaces, the secondaries crafted using pine in a manner identical to the period.  Dark oxidization has formed in the back and a nice nut brown to the underside from a century of exposure to oxygen.  The single broad drawer over three small lower drawers each retain their original batwing brasses; the central drawer is attractively embellished with applied acanthus carvings in the same spirit as the scrolled relief carvings of the solid over the knees on all four of the cabriole legs. These terminate in beautifully developed clawed feet, the sharp knuckles and scraping talons grasping a small ball.

Condition Report:
Refinished in last decade, surface with light wear, scuffs and scratches as expected.  Drawers with some old screws to tighten joints, small portion of one drawer underside replaced; original brasses, no key for lock.  Loss to portion of acanthus in central drawer carving.