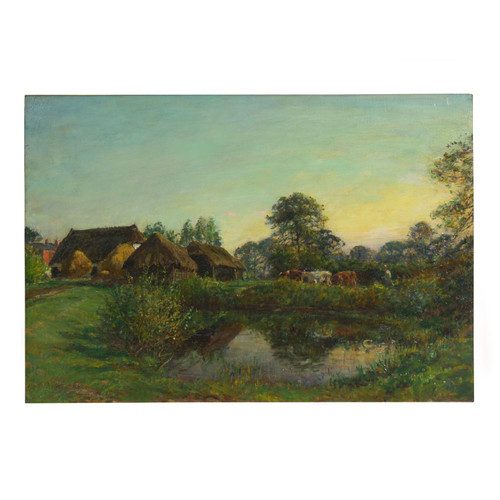 Born into a poor Boston family in 1841, William Mark Fisher studied drawing at the Lowell Institute in Massachusetts during the winter months as a boy.  He was fortunate enough to be introduced to George Inness, who Fisher recalls found him to be “…a most promising youth and it was finally arranged I should go and stay with him as a pupil without fees.” He was encouraged to finish his studies in Paris, where he studied under Marc Gabriel Charles Gleyre as a pupil until 1864 when Gleyre's health began to fail.  During this time he was heavily influenced by his fellow classmates Monet, Sisley and Renoir, but would never experience the same career trajectory due in large part to his choice to leave France and return home.

Upon returning to Boston, he found little market for his works and after a time of struggle decided to return to France in 1871.  After a year in France, he left for England where he would eventually make his permanent residence in Harlow, Essex.  There he found an active market for his work and was an almost immediate success.  He is considered one of the first artists to have introduced the impressionistic style to England, where he was a regular exhibitor at the Royal Academy, eventually showing more than one hundred works.  He was awarded the A.R.A. in 1911 and R.A. in 1919, as well as full membership in the New English Art Club and president of the Essex Club.  His works are held in numerous museums, including a large collection in the Museum of Fine Arts in Boston and the Tate Gallery in London.

When writing about Fisher in "S.G.W. Benjamin's Contemporary Art in Europe", the author observed that, having found little success in his native land, he had to leave in order to find appreciation of his work; this work "won a front rank in landscape art of his adopted country, and seems to have no superior there in the interpretation of certain aspects of nature".  In his 1893 book "Modern Painting", George Moore wrote that William Mark Fisher was England's greatest living landscape painter.

The present work is a finely developed scene that captures a farmer bringing in his cattle during the last hours of evening light.  The humble structures in the forefront are of rough-hewn wood with roofs of thatched reed, while a more permanent home of red stucco with twin chimneys peeks through in the distance.  There is a small body of water in the center of the scene that enlarges the reflections of the barn and trees just slightly before a tidy property of shrubs, trees and grasses.  The work was relined in the last several decades on linen and we have recently had it cleaned and prepared for presentation in the home.  It is signed in the lower left corner "Mark Fisher '96".