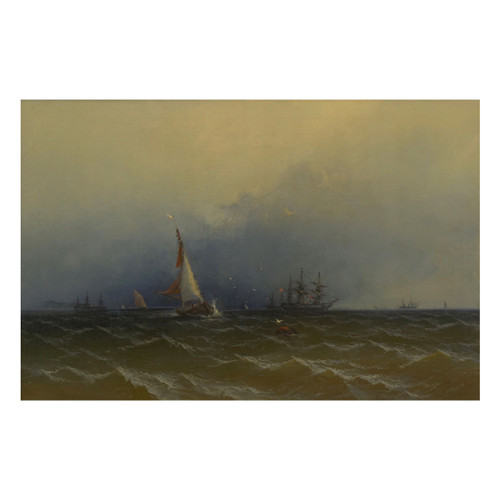 A moving scene with the energy of the wind evident in the chaos of the vessels as light plays through the dense foggy atmosphere of the looming clouds, casting its variations of warm direct light on the barrel bobbing in the nearest waves and its cold dampened light on the center of the scene. It was this ability to work with luminescence with such ease and affect that so distinguished Hamilton's work.

This exquisite maritime painting focuses in on a single sailboat as it makes its way through the choppy waters of a busy channel before an impending storm. Titled to the reverse of the canvas "Channel Scenery - Showery Weather", it was part of the Brooklyn Museum of Art exhibition focused on the important works of James Hamilton in 1966, illustrated as number 65. The work was lent to the museum for the exhibition by Mrs. Ralph Earle of Haverford, PA and was restored just prior to the public display in March of 1966.

The work of James Hamilton are treasured in public collections throughout the United States, including the Brooklyn Museum of Art where seven works by James Hamilton are held in their permanent collection. They are further held by the Metropolitan in New York, the Oakland Museum in California, Wadsworth Atheneum in Connecticut, Yale University Art Collection, the Delaware Art Museum, the Seneca Falls Historical Society in New York, the Butler Institute of Art in Ohio, the Allentown Art Museum in Pennsylvania, the Historical Society of Pennsylvania, CIGNA Museum and Art Collection in Pennsylvania, the Pennsylvania Academy of Fine Arts, the Reading Public Museum and Art Gallery in Pennsylvania and many more.

Condition Report:
Professionally conserved, including relining and cleaning (presumably in 1966). Minor surface abrading, including light scuffs at frame edge (including at frame edge lower left corner). Light craquelure throughout. Under UV examination, inpainting present along extreme edges of painting where frame presumably rubs, most notably along the right edge; scattered pin-prick touch ups throughout the painting including a cluster at the upper left corner and in the middle of the sky. 20th century frame with minor wear.