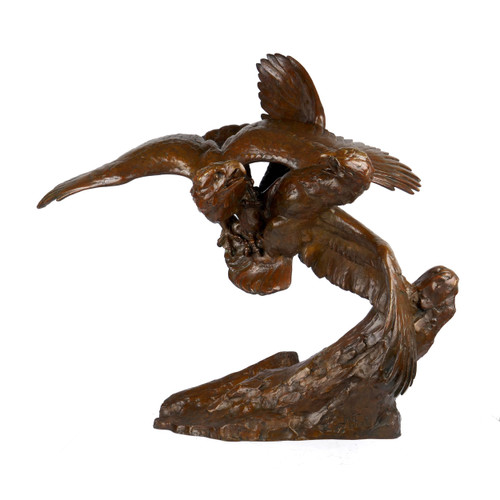 A powerful work that is full of energy and movement, this work in the modernist taste by Maximilien Fiot perhaps shows his technical ability for capturing complex subjects better than any other single work in his oeuvre. Balanced entirely on a single wing that has brushed against a projecting rock, the pair of eagles hang suspended in a fierce combat, each with razor sharp talons clamoring for a hold on the other. It is a fine representation of the beauty and majesty of this gorgeous bird. The rock is signed "M. Fiot" in his typical script and it retains the foundry pastille for Susse along with the typical "Susse Fres Ed. Paris" stylus inscription from the original mold. It is finished in a pleasing reddish-brown patina with hints of the warm golden bronze hue coming through.

Born in Grand-Pressigny on January 22nd of 1886, Maximilien Fiot studied under the sculptor Prosper Lecourtier (French, 1855-1924). An animalier in the modernist taste, he regularly exhibited at the Paris Salon des Artistes Français, where he eventually became an associate member. He was awarded a third class medal in 1911 and a second class medal in 1923. Much of his work was cast by Susse Frères and his work was included in their gallery Animalier exhibition of 1925.