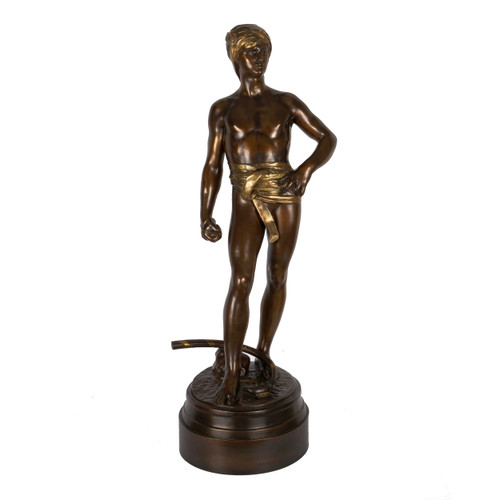 This is an exceedingly attractive work by Antonin Mercié exhibiting commanding proportions and presence.  Retaining a dark brown patina with superb variation in the coloring throughout, the sculpture captures a certain innocence and confidence of a warrior in the making.  The subject is that of David preparing for his combat with Goliath, the rustic sling wrapped around wrist with his fingers grasping the smooth round stone that would eventually defeat his giant adversary.

Cast in several editions, this is one of the largest versions; it is noted in Berman vol. I with 31 1/2" being the original edition by F. Barbedienne.  Smaller editions were reduced by the A. Colas procedure, these usually sealed with the accompanying stamp.  It was sculpted by Mercié in his early 30's, at which point he was already a famous sculptor.  Having exhibited his Gloria Victis in plaster at the Salon in 1874 and in bronze in 1875, both years with extraordinary success, David Avant Le Combat was introduced to the public in 1876 (no. 3477) as a sculpture in marble.

In the original catalog of Barbedienne, this cast illustrated on page 48, it notes:

When compared with Mercie’s David Aprés le Combat (also titled David Vanqueur), which captures part two of this scene after David has successfully slain Goliath, the detailing of the present model is softer and more impressionistic; it presents almost like a bokeh photograph with a gentle, blurry and romanticized depiction of youth and innocence - these details are hardened and firmly chiseled in part two after David has defeated his enemy.  Whether the treatment of surfaces was intended to tell a story in snapshots of the youth David turning into the man David, it is difficult to say; but there is a very definite intention in Mercie’s approach to the chiseling of this model.

The hand chasing and patina are typical of work by the Barbedienne foundry during the first years of the 20th century, quite fine as always and with wonderful overall effect; it is the original and untouched patina - the model is also inscribed on the generous base A. Manigot, who was a regular partner with the F. Barbedienne foundry and their pieces are frequently found inscribed as such.

Though it is the 31 1/2” H model, it actually stands at 34 3/8” due to the unusual original and integral base used for the work - the editions of this model our gallery has carried previously have generally terminated at the last “ring” in the base. The extra few inches makes this almost identical in height to Mercie’s 34 1/2” edition of David Aprés le Combat.

This work is a very powerful statement piece for any serious collector of fine bronze sculptures.  Rather scarce as the larger edition, this cast immediately becomes the focal point of whatever room it stands in.