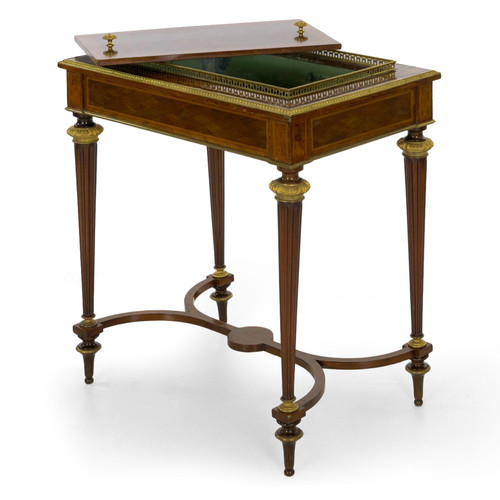 A most attractive wine serving table from the firm of renowned ébéniste, Paul Sormani.  Designed with a hint of the Neoclassicism of a century prior, the angular table is raised over legs with an intense trumpet-effect, each tapering sharply to a tiny ankle with deep fluting.  They are locked in place with conjoined opposing U-form stretchers over toupie feet.

Throughout the table top, rich marquetry patterns and designs are elegantly worked into the surface.  The sides and lid feature a woven light-and-dark wood panel surrounded by cross-banding while the frame around the lid is worked with an intricate scaled motif.

Two cast bronze knobs are used to lift the lid from the table, revealing a lead-lined interior where wine can be chilled and served.  A tiny plaque is affixed to the rosewood veneered underside of the lid, reading "Vve (Veuve) P. Sormani & Fils" and noting the address of manufacture at 10 Rue Charlot in Paris, a premises they occupied from 1867 through 1914.

For passionate collectors of fine French objects, the works by Paul Sormani's firm are always visually rich and of inordinately good quality.

PAUL SORMANI
Born in Venice, Italy in 1817, Paul Sormani established his firm at age 30 in 1847 at 7, Cimetière Saint-Nicholas in Paris as a craftsman of fine deluxe furniture (meubles de luxe) in the Louis XV and Louis XVI taste. Quickly garnering enormous attention and recognition as one of the finest ébénistes of his day, he exhibited extensively at the Exposition Universelle in Paris in 1849, 1855, 1862, 1867, 1878 and 1900 as well as other leading exhibitions in Europe. He received the medal of Premiere Classe at the Exposition in 1855 along with numerous other awards and medals throughout his career.

In review of his work at the 1867 Exposition Universelle in Paris, the catalogue of the event wrote of him: "...the whole of his production exhibits craftsmanship of the highest quality (toute sa production révèle une qualité dexécution de tout premier ordre)." The journal also noted him as "...a distinguished ébéniste of Paris, whose works deservedly attracted the attention of the public, and received the marked approval of the connoisseur."

In 1854, he moved his business to 111, Rue du Temple in Paris and again in 1867 moving to 10 rue Charlot. Here his business flourished until his death in 1877, at which time his son Paul-Charles (born 1848) and his wife Ursule-Marie Phillipine operated the company under the name Sormani Veuve Paul et Fils - pieces crafted by the firm during this time are often signed Veuve Sormani & Fils. Joining in partnership with the famous Thiebault Freres in 1914, they moved the business the same year to 134, Boulevard Haussmann until 1934 when they closed their doors.

Much of Sormanis work is either stamped on the wood or engraved on the lockplate, often with an accompanying address. As such, his works can often be dated with the assistance of both the address and types of mounts used on his work.

While the firm closed its doors during the Great Depression, the works of Paul Sormani remain cherished in important collections around the world as some of the most beautifully rendered reproductions of 18th Century decorative arts on the market. His exacting standards for craftsmanship are evident in the precision of bronze mounts, choice of the finest woods and veneers and period craftsmanship that insisted on perfection in every detail.

Condition Report:
In estate-found condition. Some chipping and patching to corners of the stretcher cuffs (above feet). Some roughness/ripple/repair to marquetry inlays around wine well, likely old water damage, as well as some shrinkage cracks in the corners. Veneer patches around edges of top. Other blemish/chips to surface from use.