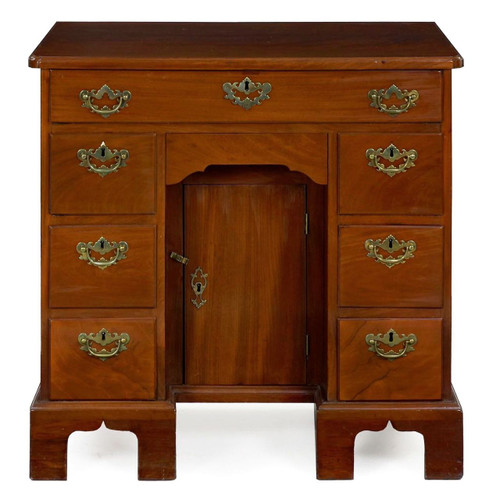 A very fine kneehole dressing-table of the George II period, the proportions are very handsome, allowing it to be a functional strike point in the bedroom without overwhelming the setting.  The aesthetic is typical of the period, tidy and neat angles that highlight the striking figure of the solid mahogany planks, entirely undistracted with excessive ornamentation.  The top is the best solid plank of mahogany in the piece, this having a dense and vivid grain slightly projecting over all three sides with tight inset corners.  A single full width drawer rests over three squared drawers on either side, these flanking a hidden apron drawer with a scroll cut lower edge over the inset prospect door.  Opening over original hinges, the door reveals a single-shelf interior lined with oak.  Notable is the careful craftsmanship evident in the drawers, particularly the fine dovetailing in the thin sawn oak.  The table rests over three bracket feet on either side.

Remaining in fine condition throughout, it is a handsome selection for the Classical interior.

Condition Report:
Retaining apparently original brasses.  No key.  Early and perhaps original locks (untested).  Some color variation throughout with darker feet, some color touchups to the sides (notably the right side).  Crack along the grain in the top.  Most feet facings original, leftmost foot facing w/ spliced lower half, next foot facing replaced, back foot on right side with a patch.  Top drawer with a patch to the lip at upper right corner and center.  Traces of an X-form bracket that once went across the back.