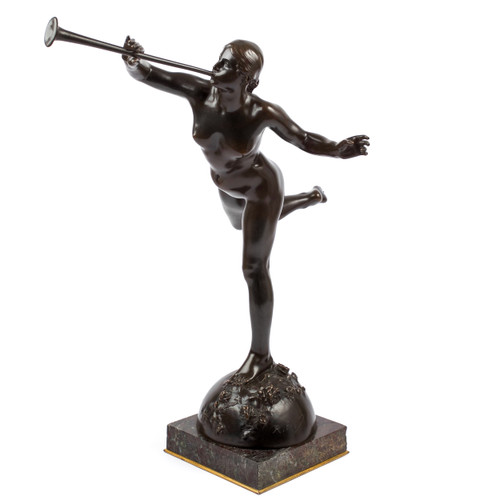 A finely balanced work that depicts "Fame" as a young woman standing over a sphere of high-relief florals holding a trumpet in her outstretched hand as her body moves forward and toward an unknown destination. The depictions of Fame are frequent in classical sculptors and painters, a motif long explored that is sometimes posed as an angel, often depicted as a woman and sometimes in male form.

Typical of Falguière, he sought to reinterpret her in light of truth and realism. As in his model of The Winner of the Cockfight, which entirely reinterpreted the mythological Mercure of Giambologna, his rendition of La Renommée reimagines Giambologna's sculpture by the same title. Rejecting fantastical and idealized notions of body, he uses a live model to animate his vision of Fame as a chaste young woman full of life and movement. Her figure is down to earth, rooted in realism - it is perhaps fitting that her leg is not raised on toes but instead almost feels rooted in the very earth she runs over. His vision is particularly interesting when compared with the sculpture of the same subject by Louis-Ernest Barrias. It perhaps best exemplifies Falguiére's clear and definitive rejection of the Classical school in preference of the Romantic ideal, an expression of his search for truth in the natural and physical world.

Cast by the Susse Fréres foundry during the last quarter of the nineteenth-century, the sculpture of La Renommée was offered in at least four editions by Susse of 124 cm, 95 cm, 72 cm and 43 cm. The present edition is the 43 cm edition and features a rich brown surface patina with exquisite detailing situated over a red-and-white marble base on a gilt bronze rim.

For a similar model, and perhaps the same bronze noting the exact same striations in the marble of the base, see Sotheby's London, 12 December 2003, lot 260, achieved 9,000 GBP (at the time of purchase the prevailing exchange rate was 1.741, resulting in a total purchase price of approximately $ 15,700 USD). Note the model offered by Sotheby's was also marked J.H. subsequent to the Susse copyright mark.

Jean-Alexandre Joseph Falguière was considered by his contemporaries during the 1870s as one of maybe six or seven major French sculptors, an artist with a gift both at capturing the Romantic spirit and of constantly remaining in the public eye. After studying drawing under Albert Carrier-Belleuse, he was accepted at the Ecole des Beaux-Arts in 1854 where he trained under François Jouffroy.

He won the highly coveted Prix de Rome in 1859 with his submission of the bas-relief Mézence blessé par Enée et secouru par son fils Lausus, a most fortunate start to what would be a most prolific and successful career. The five years he spent training at the Académie de France in Rome from 1859 through 1864 had a dramatic impact on his later entries at Salon. Despite the rigidness of his original academic training, he was able to shake free much of this rigid classicism with his first major Salon exhibition, Winner of the Cockfight, in 1864, a work that juxtaposed the classical inspiration for the subject against a freedom of movement and vivid realism of a more fully realized human being.

In 1866 he exhibited the secular mythological subjects of Omphale and Nuccia, the Trastevere Girl. He won a Medal of Honor for his 1868 Salon submissions of Tarcisius, Christian Martyr. This model typified his ability to translate a classically religious scene with his modern aesthetic, capturing the gaunt and impoverished boy with a perfect realism of features free of idealization and overworked detail. This was achieved first by study of a live model for his work, reportedly a street urchin he recruited from his neighborhood, but also by referring to photographs throughout the process; this was a methodology he employed throughout much of his career.

In total, he would exhibit at thirty-seven consecutive Paris Salons from 1863 through 1899, including from 1867 through 1878 at the Exposition Universelle and at the 1900 Exposition Centennale. His lifetime output included more than thirty monuments, including commission for The Triumph of the Revolution which surmounts the Arc de Triomphe, at least fifty portrait busts as well as a large series of female figures.

In 1870 he was inducted into the Legion of Honor as Chevalier, where he continued to rise through the ranks to Officier in 1878 and achieving the role of Commandeur in 1889. Starting in around 1870 he began sharing a studio with fellow sculptor Paul Dubois (French, 1829-1905). In 1882 he took on a professorship at the Ecole des Beaux-Arts and also was awarded membership in the Académie des Beaux-Arts.

His work was cast primarily by the workshops of Thiebaut Freres, Susse Freres and Hebrard.

Condition Report:
Very minor wear around tapped end of the trumpet - note, the trumpet will be shipped unscrewed from the figure and must be reinstalled by turning onto screw upon receipt. Very minor handling wear to original surface patina, including a bit of rubbing to surface at the heel and inside of calf on her extended leg. Tip of her elbow (holding trumpet) with light patina wear and an associated touchup. Surface cleaned and waxed, in excellent presentation-ready condition. Base with some chipping around corners and edges.