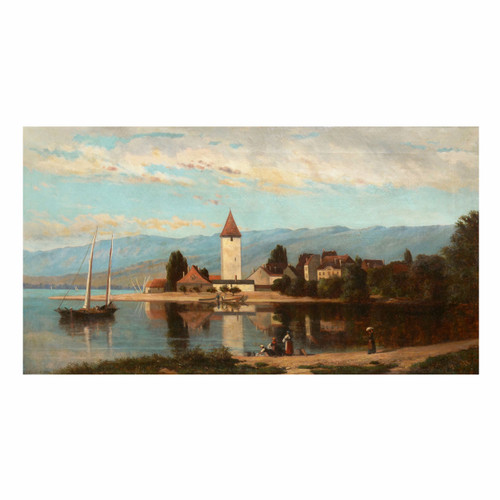 This is an unusually large work for Shapleigh with a width of 48". Bright and vibrant in his rather distinctive loose brush technique, this gorgeous piece captures the majesty of the mountains surrounding the serene lake while men ready their fishing boats and a group of women clean clothes in the blue waters. More than anything, it was perhaps Shapleigh's ability to convey a sense of time and place, the roots of a picture's history and a glimpse into the lives of the people and architecture he surveyed that set his work apart.

Born in Boston, Massachusetts in 1842, Frank Henry Shapleigh trained at the Lowell Institute of Drawing before serving in the Union Army during the Civil War. Afterwards he went to Europe to study under Émile Lambinet (French, 1813–77) of the Barbizon School in Paris. He set up a studio in Boston where he was elected to be a member of the Boston Art Club, but also spent many winters in St. Augustine, Florida as an artist "in residence" at the Ponce de Leon Historical Hotel. His relatively small painting The Plaza Basin, St. Augustine achieved $ 160,000 when offered at Skinner's Auction in 2006, while at Christies both Palm in St. Augustine, Florida achieved $ 62,500 and The Old Sanchez House, St. Augustine achieved $ 103,000. He eventually settled in Jackson, New Hampshire in 1896 where he would work out of a small studio until his death in 1906. While he is perhaps best remembered for his intimate landscapes throughout the White Mountains in New Hampshire, his paintings of the lively streets of St. Augustine are his most sought-after works.

Condition Report:
Housed in an early and likely original frame with discoloration to the gilding, chips/losses and missing beading. Professionally conserved. Under UV showing inpainting to spots in the clouds, otherwise apparently untouched. Unlined. An exceptional presentation.