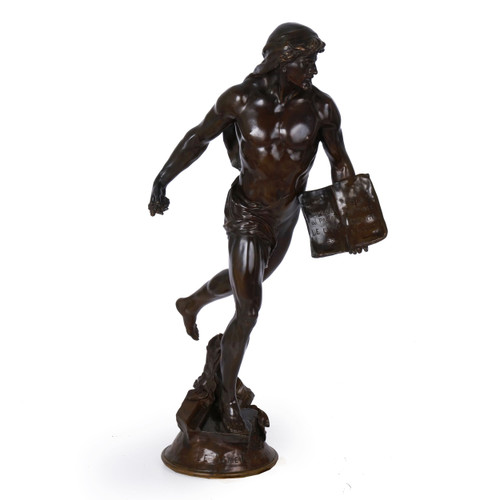 In this large and moving work, French Romantic sculptor Emile Picault perfectly captures a difficult pose as the man is depicted in full motion running across the earth with a branch of seeds in one hand and a book in the other.  The work is titled Le Semeur d'Idées [the Sower of Ideas]; in his hand, an opened book reads "Messager du Progrés: Le Livre / Fils du Passé Enfante L'Avenir" ["The Messenger of Progress: The Book / Son of the Past Gives Birth to the Future"].  Picault modeled a different sculpture to which he gave the same title, suggesting that they may be part of a larger series.  In that model a seated figure holds a branch of seeds out over the earth with a book propped against the naturalistic base incised in French "To the four winds of heaven he sows the seeds of the future".

The present example is a difficult subject to model from a technical standpoint, all elements having to balance perfectly in order to remain even on a level surface.  Picault achieved this, perhaps by calculation, such that the strong outward swing of the rear leg offsets the forward angle of his upper half.  The edge of the base is crisply incised with the signature "E. Picault" accompanied by the E. Colin foundry mark.

For collectors of fine academic sculpture, this is rightly considered a rare subject, only found on the market infrequently.  It is a moving work of art and a technical feat of precision.

Note, this is meant to be displayed over a flange, these often part of a larger base or installed on the top of a pedestal to allow the sculpture to rotate without risk of falling over. It does not include this and the buyer will likely want to have one fabricated for it at some point.

Condition Report:
Wear to patina on back of figure's arm (holding book), rubbing wear to hair, wear around edges of base. The backward reaching arm has two white marks and some patina discoloration. Arm holding the book with a slight wiggle as the roman pin has loosened slightly (note the seam). Restoration to foot, invisible except when examined carefully under UV; touch ups to patina evident. Waxed and polished.