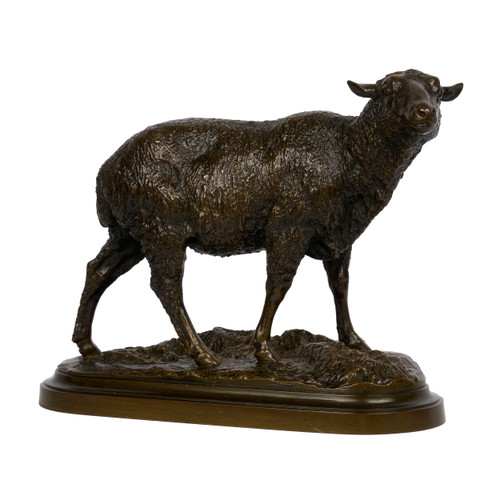 This exquisite model of Merino Ewe by Isidore Jules Bonheur was cast circa 1870 by the Peyrol foundry, the tiny foundry cachet cold-stamped to the reverse of the bronze along the edge of the base. Our gallery has also handled Bonheur's variation on this model, a combined grouping of Merino Ram and Ewe - both Merino Ram and another version of Merino Ewe that were acquired together may still be available in the shop inventory.

The present model is finely detailed, typical of Isidore Jules Bonheur in his objective and exacting modeling of these sensitive creatures.  Note the careful handling of the wool, this chaotic furling difficult to model but even more difficult to cast competently.  When carefully examining this sculpture, it quickly becomes clear why Isidore and Rosa's sheep were some of the finest and most highly sought-after models authored by the 19th century Animaliers.  The face of the ewe is chiseled with exceptional crispness and is flawlessly finished.

The figure is finished in a dark brown chemical patina with hints of black over lighter bronze hues.  It is signed in the naturalistic base "I BONHEUR".  The underside of the base is finished in a gold wash and shows the typical Peyrol foundry practice of peened post-end joinery.

Condition Report:
Minor rubbing to relief, overall a fine original patina that has been carefully cleaned, conserved and polished.