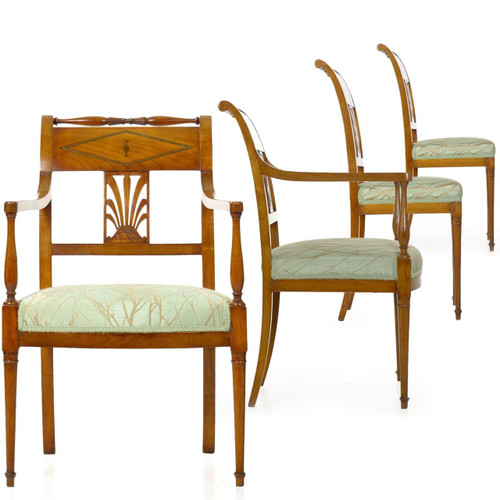 An exquisite and finely crafted chair set en suite consisting of two arm chairs and two side chairs, they are delicate in profile and precise in workmanship. The crisp central stamp to the reverse of the seat rail reads CHAPUIS, the marking of Jean-Joseph Chapuis (French/Belgian, 1765-1864), an important Belgian ebenisté and menuisier.

Born in Belgium in 1765, Chapuis trained in Paris and achieved the title of master Ebenisté, allowing him to stamp his work. He returned to his hometown and set up shop in around 1795, where he continued to produce work through 1830. His output through the first quarter of the 19th century was considerable and the quality of his work is invariably excellent. He is credited with some of the earliest known steam-bending and lamination techniques as a menuisier (chair-maker).  The body of his work was heavily influenced by the Classical objects of Ancient Greece and Rome and included a full range of objects from tables, consoles, chairs, chests and desks executed in the Empire taste.

When the first books on French furniture of the 18th century were written, the authors attributed the estampillé of Chapuis to a Parisian, Claude Chapuis. There is some confusion around Claude Chapuis, presumably a Parisian cabinet-maker active from 1797 until around 1818, but by all accounts he was not an ebenisté; it is plausible that he was a simply merchant in the furniture trade. It is perhaps because of the confusion that knowledge of Jean-Joseph Chapuis' outside of Belgium and France was somewhat stunted.

The present set of chairs are a harmonious suite crafted of a beautifully grained fruitwood, likely cherry.  The crest rail is a turned post with tapered balusters flanking a complex and beautifully reeded center; note the subtle taper and swell of each reed within these.  A pierced splat back with seven anthemion lobes is situated over a ribbed shell carving.  The shaped upper panel is embellished with a dark-wood inlay enhanced with a brass stringer-inlay surrounding a crisp Greek amphora.

Either of the open arms are raised with turned balusters that almost perfectly mirror those of the crest rail.  Despite the delicate profile of the legs and thinness of the apron, this has remained sturdy and tight due to a careful approach to the design: tenon-mortised apron joints are supplemented by blocking at all four interior corners.

This design was likely produced by Jean-Joseph Chapuis in some quantity, as an identical set of six side chairs with a single arm chair were offered at Sotheby's, Paris (November 7th, 2013, lot 237).  His work is rarely found outside of France and Belgium, though our shop was fortunate enough to carry an Empire Secretaire designed by Chapuis.

They are an unusually pleasing set of chairs with equal parts of excellence in design, material and precise craftsmanship.

Condition Report:
All chairs should be reupholstered; these were recovered at some point; three are in relatively good condition, one arm chair has extensive staining.  Some blocking replaced and reset.  Scuffing and blemishes to surfaces; scarring along edges of the apron; minor joint separations between arm and stiles; some well done repairs at front corners; one side chair with two pins in back stile joint at apron.  All joints remain sturdy and tight.