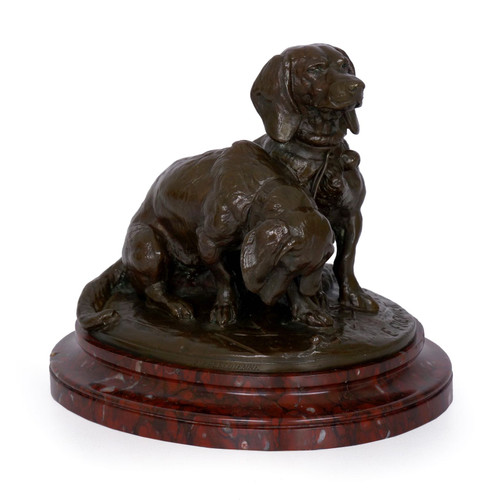 This is a simply gorgeous group sculpted in bronze, the title of which varies somewhat depending on the text you examine - depending on the reference text, it can be noted as Pair of Seated Dachshunds, Chiens Bassets and Deux Bassets. Though Emmanuel Fremiet was adamant about being more than an Animalier and executed some of his most substantial public commissions as depictions of full figural and military groups, he remains best known for his sensitive animal subjects. The present example, one of his most popular dog groups, captures a pair of Napoleon's dogs: "Ravageot" and "Ravageole". By lowering the head of one dog, he gives depth and a story to the group, Ravageole's face full of curiosity and totally oblivious to her surroundings as she watches the passing of a snail. Ravageot is proud and alert, his left foreleg slightly cocked and the bells around his collar stationary as is looks on at a distant point of interest.

Chiens Bassets has its earliest listing in 1848 and is listed in Fremiet's 1853 exhibition at Salon as "Ravegot & Ravageole, Basset Hounds - bronze, In the Salle des Gardes, Palais de Compiegne". The group was sculpted in life-size, exhibited at the Deuxieme Empire Exhibition at the Grand Palais in the spring of 1879. While dimensions for the group vary somewhat, the casts executed by Fremiet are historically documented between 5" and 5 3/4" high and approximately 6"-6 3/4" long. Like Barye, Fremiet edited much of his work personally, both in bronze and plaster - later many of his models were purchased by the foundry of Ferdinand Barbedienne and were cast in bronze editions; these, however, are always marked with the stamp of Barbedienne. Some later models were also issued by Susse Freres, though in lower quantities than those by Ferdinand Barbedienne’s foundry.