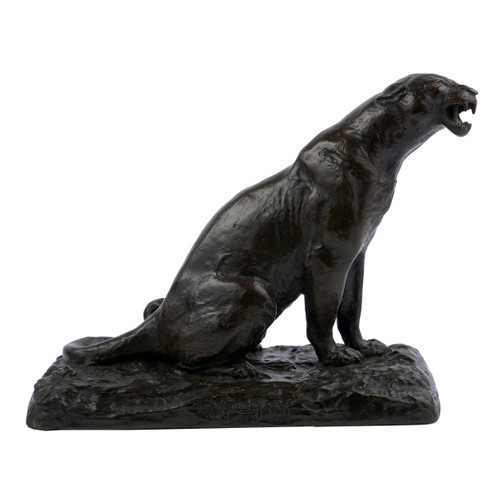 VIEW OTHER WORKS BY Susse Freres

A vigorously modeled figure of a panther, Geoffroy executed this model in the nouveau and growing interest in modernism that began gripping the Animaliers during the first quarter of the 20th century. With a light impasto to the surface, it is evident where the artist heavily worked the wax before casting - note the presence of fingerprints that have transferred into the casting, likely a rather early lost-wax casting of the model.

An exquisite casting, Geoffroy does a marvelous job alluding to the power, ferocity, agility and curious personality of the panther.

Adolphe Louis Victor Geoffroy was born in Paris, France on February 27th of 1844 son of Adolphe Victor Geoffroy de Chaume (1816-1892). He studied under his father and began exhibiting at the Salon in 1861 and continued through 1910. He was one of the original members of the Société des Artistes Français in 1883, was awarded a third class medal in 1875 and achieved the second class medal at the Salon of 1889. His bronze bas-reliefs on the doors of the Strasbourg Cathedral are a lasting reminder of his public contributions..