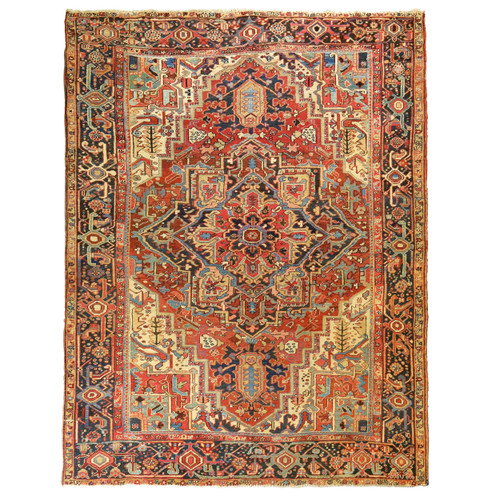 An absolutely stunning room size rug from the Heris region of Persia, now Iran, this very fine carpet was woven during the first quarter of the 20th century. It exhibits the sturdy and rugged knotting of wool over a cotton foundation that has allowed the rug to survive in overall very good condition more than a century.

The vibrant red primary ground has a touch of warmth in the hue with a rather active field filled with representations of acanthus, vines, flowers and a rather unusual "seed pod" motif along the edge of the spandrels. These corner spandrels are woven with an ivory ground and are unusually busy with a chaotic but symmetrical display of trees, garden borders and a host of other geometrical shapes in a broad range of colors: teal-green, pink, light blues, red, beige, black and navy blues all contained within a stepped border.

In the center of the ground is a powerful eight-point medallion containing layer after bordered layer of geometrical patterns that culminate in a single central rosette.

Thin floral borders around the far edges of the rug flank the large repeating herati field of the primary border, this a remarkably complex and active edge.

The carpet is a picture of complex geometry, a patient product of countless invested hours and a remarkably beautiful result. It has worn very well, the pile low and fully revealing the stark angularity of the carpet while still remaining full of color and strength.

It is a fine carpet that will certainly set your room apart in a most magnificent way.

Condition Report:
We have not had the carpet professionally cleaned and colors would likely be more vibrant and discolorations minimized if this service were performed. Ends reduced with fringe frayed into the first border on both sides, some fraying to selvedge cords. Structure is sturdy, soft and pliable.