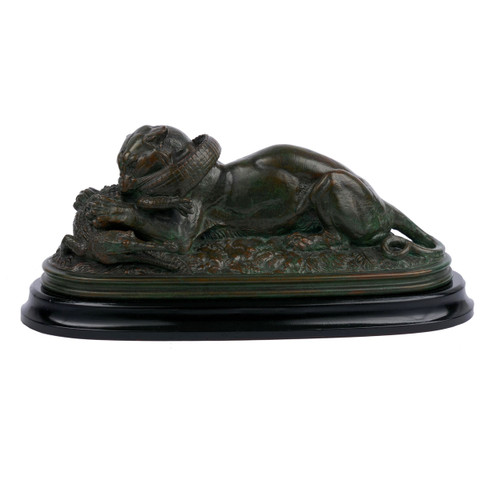 VIEW OTHER WORKS BY Barye, Antoine-Louis

Having captured in his grasp a Gavial crocodile of the Ganges, there is a patient determination in the confident posture of the Tiger that leaves the viewer in active admiration of this powerful predator. The snarling Gavial hardly draws our sympathy, as perilous his situation, for there is no fear in his eyes as his writhing body and snapping thin jaws seek any weakness for escape. Despite being a posthumous cast, the level of detail is spectacular with excellent preservation of the Tiger's stripes, exquisite capture of the scales of the crocodile's skin and fine handling of the smallest elements: the eyes, the crisp claws, the small turtle caught in the mix.

Barye's presentation of the plaster "Tigre Dévorant un Gavial" at Salon in 1831 changed the course of his career. It was the moment he became recognized as a serious talent. And while in critic circles the debate raged on regarding whether his depictions of animals constituted art in the Classical sense or whether his creations were mere decorative representations, the validity of his studies were summed up in this work. Etienne-Jean Delecluze wrote in his criticism of the Salon that Barye's study was "the strongest and most significant work of the entire Salon". Théophile Gautier wrote about Tigre Devorant un Gavial noting "what energy, what ferocity, what a thrill of satisfied lust for killing shows in the flattened ears, the savage gleaming eyes, the curved nervous back, the clutching paws, the rocking haunches, and the writhing tail of the tiger, and how the poor scaly monster doubles in agony under those cutting teeth and jaws".

After exhibition, Barye offered the sculpture in two reduced models.  After his death in 1875, the model was edited by Brame and offered in three sizes and towards the turn of the century the smallest edition was offered by the Delafontaine foundry.

The present model was sand-cast in bronze and was finished in a green and brown patination; the underside of the bronze was filled with plaster at some point close to the turn of the century to facilitate non-intrusive affixing of the wooden base. Naturally this can be removed and the plaster can be cleaned out, though we have left it in its original state.