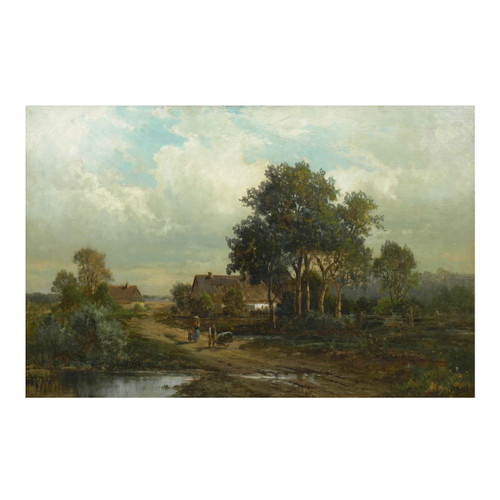 A moving landscape that captures a glimpse of the countryside of Bamberg, Germany during the late 19th century, there is a gentle story of peasant life told in the figures strolling down the rugged muddy path. Presumably taking their goods to town, the man leads a wheelbarrow laden with goods as with his wife and child walk behind, her arm raised to shade the child from the summer sun. The dense cloud cover overhead lends a heavy atmosphere through which light cascades evenly on the scene, most luminous along the path where long shadows are cast behind the figures as they trudge towards the resting water that has partially obliterated the road.

It is perhaps Weber's ability to convey the warmth of the Romantic with the technical precision of his German academic training that is most compelling in his work. In glimpsing through this window, we are left with a curiosity and an interest in these rich characters, their lives, this moment in time.

Born in Philadelphia in 1855, Carl Weber studied at the Munich Academy of Fine Art. His exhibitions include the Pennsylvania Academy of Fine Arts (1876 through 1905), the Philadelphia Art Club (1891 through 1908) and the National Academy of Design (1881 through 1893). He was awarded a Gold Medal in 1902 by the American Art Association, received Honorable Mention at the 1893 World's Columbian Exposition in Chicago, again being recognized with Honorable Mention at the 1895 Atlanta Exposition.