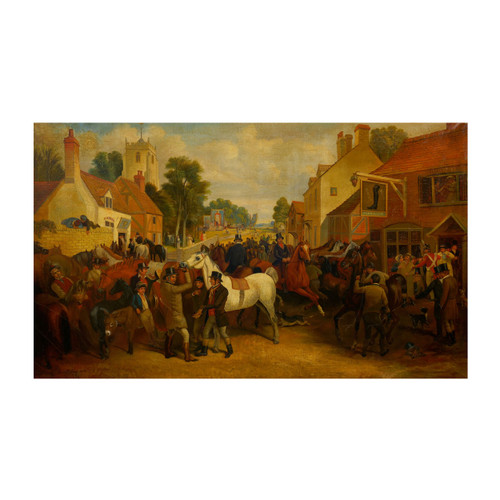 A very substantial work by Thomas Smythe, unusually large in dimension compared to the majority of work he completed for the public, the vivid and lively scene is executed in oil on canvas and captures the annual Barnet Fair as it happened in 1845.

The streets are packed as fairgoers and horses line the tight street lined with small shops. Children play while townsfolk patronize the local pub and a large "rocking ship" ride operates in the distance. In the foreground, two men argue over the price of a horse, the figure on the left checks the teeth of the horse as it is steadied by the onlooking jockey; the figure on the right heatedly exchanges with him. It is executed with a simplicity and folksy quality that captures the essence of the people, the emotion of the scene and the historic quality of the moment. The unusual use of perspective, employing something of a "fish-eye lens" in depicting lines and proportions, it is a riveting work of nostalgia.

The work is signed lower left with the title in black script. It is housed in a substantial and very impressive carved giltwood period frame.

The Barnet Fair was founded in 1588 by Queen Elizabeth I as a means of trading livestock, eventually evolving into a lively event complete with fair activities and festivities until its ceased to exist in 1881.

Born in 1825, Thomas Smythe was raised in Ipswich with his brother Edward Robert Smythe (British, 1810-1899). Little is known about the education he received as an artist. Following in the footsteps of his older brother, Thomas set up as a painter on Brook Street of Ipswich shortly after his brother left the area in 1845. In 1868 he was awarded a Silver Medal by the Ipswich Art Society. He moved to London in 1899 where he would remain until his death in 1906.

Condition Report:
Early frame with toning, gilt loss and chips. Under UV spots of inpainting upper left & one lower right. Several lines of long craquelure to the paint throughout clearly visible in the images. Canvas with grime and yellowing; our conservator tested the canvas but the varnish has apparently cross-linked with the oil layer and we cannot safely clean it.