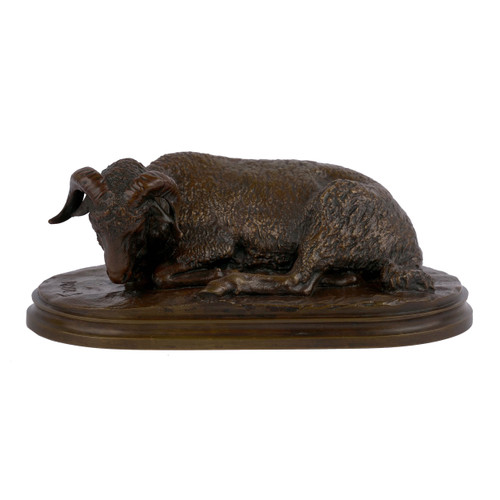 Rightly considered rare, this exquisite sculpture by Rosa Bonheur is very infrequently found outside of museum collections.  We had the opportunity to carry this cast once before, an early piece also by the Peyrol foundry (though unmarked).  The work is documented as "Bélier Couché", noted as such in Anna Klumpke's early biography on her friend ("Rosa Bonheur: Sa Vie, Son Oeuvre", 1908, p. 429).  It perfectly captures the essence of this resting ram, eyes closed and head half-hung in repose.  The ram's form is exacting, every detail represented with realism, the sharpness of the work representative not only of the artist, but also of the notable skill of the foundry.  This work was cast by Rosa Bonheur's brother-in-law Hippolyte Peyrol in his foundry.  It retains the original and beautifully preserved brown chemical patina, glowing under waxes.  The base is signed Rosa B. in her typical script, the lip of the base stamped PEYROL.  It is listed in Bronzes of the 19th Century as having sale dimensions of 9 cm in height and original exhibition dimensions in 1973 at the Gallery of Decorative Arts at the Lausanne Les Animaliers du XIXe siecle record the dimensions as 9.5 cm x 22.5 cm.  It is pictured in both Animals in Bronze and The Animaliers (noted below).

Rosa's deep admiration for the paintings of Edwin Landseer is evident in her sensitive modeling subjects; the paintings and sculpture of Eugéne Verboeckhoven greatly influenced her strict adherence to realism, first in her sculpture and later in her paintings.  She was particularly good at capturing charming characteristics of her animals without any hint of the Romanticism found in works by academic animal sculpture of her contemporaries whereby emotions and expressions were imposed on the creatures with little regard for reality.