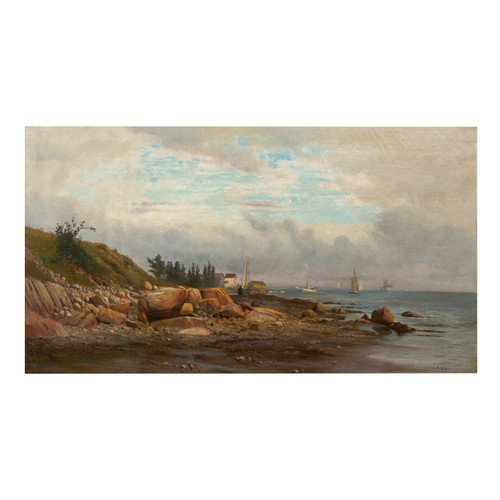 An exquisite window into a perfect summer day overlooking the quiet waters along a rocky coast, the sky opens up a nearly perfect circle in the cloud cover to reveal a surreal clearing of blue light that scatters among the sailboats and buildings in the distance. A very powerful piece in its careful and highly technical use of light, the rocks are gleaming with a range of reds and golds before a chaotic grassy hill as the nearly still water ebbs and flows against the sandy beach. The dense atmosphere is perhaps kept at bay but not entirely dispersed, as boats disappear into the mist of growing clouds along the horizon.

Typical of Carl Philipp, this work was almost certainly painted in-situ, as bits of these outdoor elements were trapped in the fresh oil paint. this very fine work is housed in an early and perhaps original giltwood frame.

Carl Philipp Weber was born in Darmstadt, Germany to Carl and Eleanor Weber in 1849. They immigrated as a family to Pennsylvania in 1853 where they eventually settled in Germantown, PA. His father was a well regarded as a violinist and supported the family as a music teacher. Carl Philipp's uncle was the landscape artist Gottlieb Daniel Paul Weber (German, 1823-1916), who worked in Philadelphia from 1849 through his return to Germany in 1860. Carl traveled to Germany and studied painting under both Paul Weber and August Von Kreling (German, 1819-1876).

Paul's son Carl C. Weber (Philadelphia, 1855-1929) was close in age to Carl Philipp and also a prolific painter, leading to some confusion among galleries and auction houses when attributing paintings to either man. Though both men studied under Paul Weber, Carl C. Weber was best known for his water color paintings and adopted his father's passion for romantic landscapes, generally signing his work "Carl Weber". Carl Philipp Weber painted oil pastoral landscapes and coastal views in a rather distinctive luminist style and would generally sign his work "Carl Ph. Weber". Both would become prolific painters, though Carl Philipp's work is today rather scarce compared to his cousin.

In 1874, Carl Philipp returned to Philadelphia where he lived with his father and by 1888 he set up a studio at 1134 Arch Street. His work included scenes of Lake George and the Hudson River Valley, as well as many other sketches throughout the Adirondack Mountains. Much of his work was painted at least in part in-situ. He exhibited in 1880  and 1881 at New York's National Academy of Design, the Art Institute of Chicago and regularly at the Pennsylvania Academy of the Fine Arts from 1876 through 1891, also being an active member of the Boston Art Club and the Philadelphia Artists Fund Society.

Condition Report:
Professionally conserved and ready to place. Frame is early with wear to gilding throughout, including the loss of beading and gesso visibility. Under UV showing a few spots of touch up in the sky as well as speck touch ups throughout.