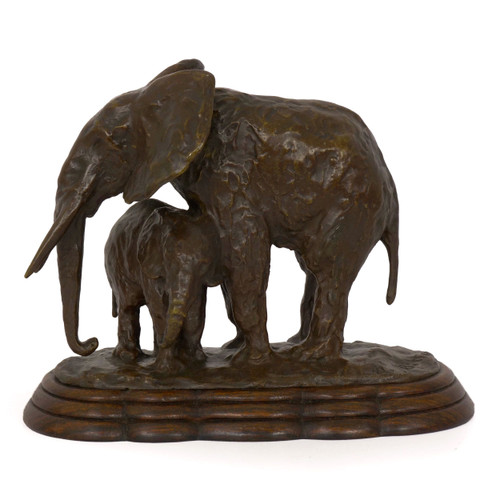 VIEW OTHER WORKS BY Susse Freres

A rich and sensitive work, this fine sculpture beautifully depicts the protective nature of the proud Elephant as she stands over her young. The loose impressionism and rough working of the model is captured in the bronze in a way that leaves us with a sense of being very close to the artist's vision. A heavy impasto in the shaping of the model gives us a wonderful a sense of motion, an attempt to capture an incomplete story that remains in flux. As a lost-wax casting, the model was signed "Ary Bitter", "Susse Fre. Ede. Paris" and "cire perdue" in the wax prior to being cast, rather than the signatures being engraved or worked into the model afterwards. It is finished in a complex variated brown patination with hints of red-oxide with highlights intentionally relieved for effect. A tiny cold-stamped "FRANCE" is visible along the lower front edge. The work is raised over a sculpted solid rosewood base, reeded and undulating with a movement that compliments the work beautifully.

Born in Marseilles, France on May 29th of 1883, Ary Jean Léon Bitter began his studies under the guidance of Emile Aldebert at the Marseille Beaux Arts in 1895 and later under Jules Coutant.  He left Marseilles for Paris where he joined the studio of sculptor Louis-Ernest Barrias and in 1906 was admitted into École Nationale Supérieure des Beaux-Arts.  There he received honourable mention for his exhibit of l'Enfant au chevreau in 1910. He exhibited at the Salon des Artistes Français between 1912 and 1939, receiving a bronze medal in 1913, a silver medal in 1921 and a gold medal in 1924.  He was distinguished with the classification of "hors-concours", allowing him to enter exhibition without jury approval and was made a Chevalier of the Légion d'Honneur in 1932.  He also achieved a final gold medal at the Exposition Universelle of 1937.  Many of his smaller works were cast by Susse Freres, the renowned Parisian foundry with whom he collaborated to produce several limited editions. Bitter specialized in the sculpture of animals, but he had great breadth to his work and produced a varied body of sculpture in the Art Nouveau taste with groups of figures combined with animals.