Located in the heart of the Cumberland Valley in Shippensburg, Pennsylvania, Silla has actively collected, conserved and cataloged fine objects since its inception in 2009. While the collection has an emphasis on sculpture from 1860 through 1930, a full range of beautiful objects, furniture and paintings are always on display in our 9000 sq ft downtown gallery. 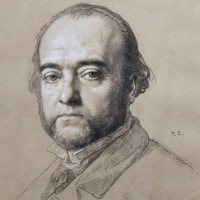 Born on August 6th of 1810 Ferdinand Barbedienne would go on from his small village in Calvados, France to build one of the most important bronze foundries in France.  In 1822 he apprenticed to a Parisian papermaker and by 1834, Barbedienne was a successful manufacturer of wallpaper.  In 1838, he changed careers entirely when he partnered with Achille Collas, inventor of a groundbreaking machine that would allow bronze sculptures to be reduced in size efficiently while maintaining exacting scale and detail.  The cachet of A. Collas Reduction Mechanique would become almost synonymous with the Barbedienne foundry, as the marking appears on nearly every work they produced.  They would call their firm "Collas & Barbedienne" and the two began selling smaller versions of the great historical works of art, copied from museums and cherished by the "Grand Tour" patrons looking to bring a piece of antiquity into their homes.  In 1843 they began editing and casting works of art for contemporary artists and by 1850 they were producing elaborate decorative arts, including candlesticks, sconces, candelabra, vases, andirons and furniture.  By 1851 the firm was simply known as Barbedienne and they exhibited extensively at every World Fair, receiving numerous medals at these international exhibitions, including the Gold Medal in 1855 and medals in three different classes at London's 1862 International Exhibition.  It was at this exhibition where Barbedienne's work in enamel, which was widely considered to be at the forefront of enamel-work, that their wares in enamel were first introduced.

Barbedienne's ability to produce works of art with scale and economy led to a democratization of art, placing examples of antiquity and important works by living artists within reach for households across Europe.  He worked with some of the most important sculptors of their day, including Eugene Aizelin, Antoine-Louis Barye, Emmanuel Fremiet, Antonin Mercié, Henri Chapu, Emile Guillemin, Eugene Delaplanche and many more.

Art production was briefly interrupted in 1870, as they began manufacturing cannons in the foundries in the outbreak of the Franco-Prussian war.  Their most well known catalogue is the widely reproduced retail catalog of 1886, which offers a wealth of information for the collector on exact dimensions and original retail prices of works produced during this period.  The same year he was awarded the Jean Goujon Gold Medal by the Société d’Encouragement pour l’Industrie Nationale.

He died on March 21st of 1892 and is honored with extraordinary memorial in the Pére Lechaise Cemetery in Paris, a marble tombstone surmounted by a bronze bust of himself.  Writing in the 1894 edition of the daily newspaper Le Gaulois is a beautiful description of the tomb:

"On a high square stone pillar of the Vosges rests the bronze bust... to the right and left of the pillar, at the head of the sarcophagus he surmounts, stand two life-size figures of women, also in bronze. Both carry palm branches: the figure symbolizing "Art" is helmeted, a chimera writing on the helmet, while the other is armed with a hammer of "Industry"... at the foot of the sarcophagus, a delightful maiden's figure rests, her bust is naked, but nudity is so deeply chaste that her figure is very moving. She is discouraged and simple, expressing a pain that is truly inconsolable as she lets fall on the stone a torch whose flame wobbles and goes out."

As his heir, Gustave Leblanc (French, 1849-1945) succeeded his uncle as president of the company, which eventually changed its name to Leblanc-Barbedienne and would eventually work with Auguste Rodin.  The foundry continued operation through 1952.

The two sculptures below are circa the 1880s, each signed "F. Barbedienne, fondeur" with rounded screw joinery and gilt wash to the underside.

Below are three sand-cast figures by Antoine-Louis Barye cast by Barbedienne post-humously between 1875-90.

An example of a 20th century model follows, along with the signature.  Note the presence of square steel nuts with modern washers.

Examples of the F. Barbedienne signature follow loosely ordered by approximate date from the last quarter of the 19th century.