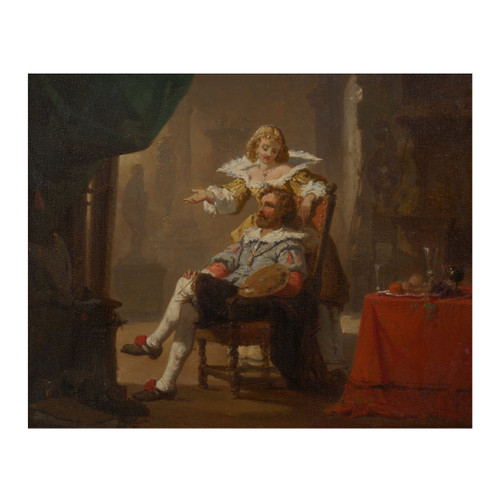 "An Artist and his Muse" (1856), oil painting | Hendrik Frans Schaefels

A quiet scene depicting an artist waiting for inspiration, staring absently at his canvas with his brush at the ready while engaging with a young woman. The room is dark and dusky with a heavy atmosphere of light softened after bouncing off of the surface of tapestries and life-size sculptures before providing illumination to this corner of the room. Executed in oil on panel, the scene is signed "Hendrik Schaefels 1856" in the lower right corner and the reverse of the panel retains an old yellowed label with a nearly illegible hand written inscription that perhaps describes the painting - the notation of 1856 can be made out and it appears to be signed "Richards". Old gallery labels are scattered around the edges.

Hendrik Frans Schaefels was born in Antwerp in December of 1827 to Hendrik Raphael Schaefels, an artist and teacher of decorative arts at the Royal Academy of Fine Arts in Antwerp. He studied landscape painting under Jan Baptiste de Jonghe and marine painting under Jakob Albrecth Michael Jacobs at the Academy; Jacobs' influence on his painting was significant and remained evident in his lifelong affinity for seascape paintings as well as his taste for broad-scale romantic compositions. From 1842-44 he worked in the studio of cityscape painter Jan Michiel Ruyten.

In 1844, a seascape painting by the 17 year old Schaefels was accepted at the tri-annual Salon in Antwerp. In 1849, the full view of Jacobs' influence could be seen in Schaefels powerful romantic submission of "Battle of the Avenger" to the Paris Salon. Schaefels was effective at satisfying the Romantic idealism that gripped Belgium during the early years of his career, as public interest in scenes of greatness, glory and notable historical events was heightened by the recent establishment of Belgium as an independent state in 1830. His works were further presented at the British Institution in 1860 and retrospective Salon exhibitions in 1880 and 1905.

While he excelled at these powerful scenes, Schaefels was very effective at more modest works, producing a large volume of genre figure paintings, seascapes, city scenes, canal views, naval battles and landscapes of the picturesque. He also worked as an illustrator and was well regarded for his significant contribution to the revival of etching in Antwerp where he died in 1904.