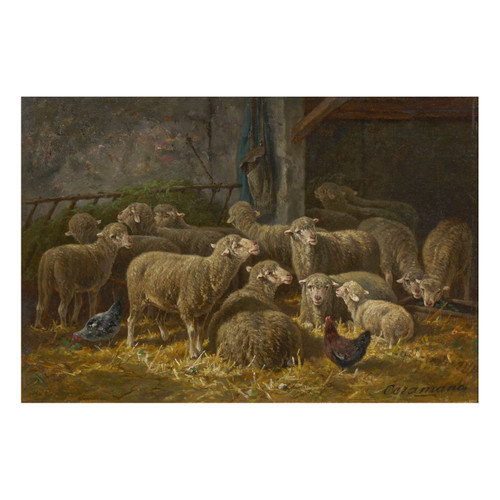 This fine late Barbizon painting of a fold of sheep resting in a barn is notable for its exquisite detail and complex arrangement. In total we have fifteen sheep gathered together with two chickens pecking at their feet as they relax in the warmth of the hay. The interior detail is striking with a stucco stone wall in the background from which the hay trough is anchored; a seed bag hangs from the wall perpendicular.

Ceramano's use of light is perhaps most interesting, where he chooses not to hide the background in abject darkness but rather tackles the detail while scaling the light from vivid to opaque. The center has rays illuminating the largest sheep with harsh shadows while the rest of the group steps back from the focus.

A rich composition signed in his typical script lower right.

Born in Thielt, Belgium in 1829, Charles-Ferdinand Ceramano was self-trained together with Charles Jacque and the two collaborated together on projects regularly. His work eventually grew to nearly resemble Jacque's work with a firm specialization in pastoral scenes, specifically focused on sheep flocks and interior scenes of sheep. Ultimately, Ceramano would be the last painter of the Millet and Théodore Rousseau groups in the Barbizon School. He exhibited at the Salons des Artistes Français in 1893, 1895 and 1897. Having spent the last 40 years of his life in Barbizon, France, Ceramano was laid to rest there in 1909.

Condition Report:
Contemporary frame. Relined. Old frame impressions around edge of painting. Bright and vibrant surface. Under UV showing touchups around extreme edges and flaring of potential inpainting in upper right darkness, the feathers of foremost chicken, between the two largest sheep laying down, between the legs of leftmost lamb and a few other touchups.