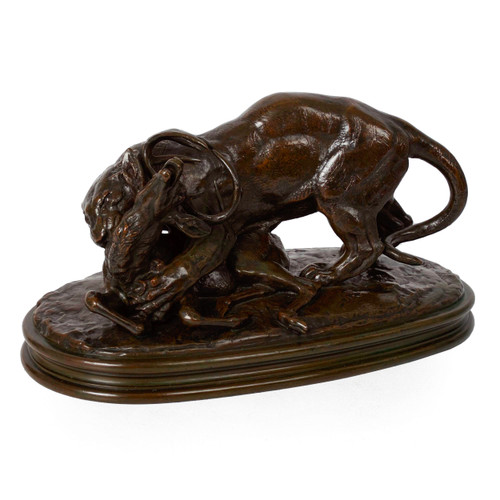 This superb bronze model is a reduction of the monumental stone carving by Barye in 1835 purchased by the French government the following year and and placed in the permanent collection of the Musée des Beaux-Arts in Lyons. It is the culmination of years of scientific study and preparation that are finally born out in this violent model: first with his Poised Stag of 1829, his prior studies in animal combat and his extensive 1830s anatomical drawings noted "tigre" from his sketchbooks held in the collection of the Louvre; these include close ups on the segments of bones, hip joints, measurements of ears and nostrils, studies of extended claws and dorsal views of the paws among other detailed drawings of the powerful animal. The same sketchbook contains drawings inscribed cerf de malabar, this too with various measurements and drawings in preparation.

The drama and tension of the subject is something entirely beyond the narrative capabilities of art of the 1830s. It is a perfect juxtaposition of the vicious and the pathetic, a picture of overwhelming power devoid of soul. It is a snapshot of contrasts, of opposites - the hunter and the prey, the strong and the weak, the menacing and the innocent, the mechanistic and robust versus the spindly and fragile. As the stag gasps its last breath, its defensive antlers are rendered impotent in their Arabesque cursive flow, the tiger just beyond the reach of their effect.

A technical feat, this sand-cast model is composed of at least twelve individual miniaturized components that were then later assembled into the final work and the joints hidden under the careful hand of the patineur. The surface is incredibly compelling with extraordinary crispness and texturing of the surfaces throughout. When compared with the identical model in the National Gallery of Art (acc. no 2015.19.3831) acquired for the collection directly from Barye by William Walters in 1873, the present model exhibits greater crispness of elements throughout with a vibrant translucent surface that is perhaps superior; it is notable that the formulation of the patina appears to be identical in both models: reddish-brown oxide with overall brown and hints of green sporadically throughout.

This model was produced first under the collaboration of Martin and Barye from 1845-1857 as number 50 in their catalogue for around 120 francs. Barye cast it in his own atelier from 1857 through his death in 1875 as number 57 in his catalogue, loosely maintaining the price until 1874 when he raised it to 200 francs. After Barye's death, this model was acquired by Brame for production through his foundry and was initially offered in his catalogue at a price of 200 francs. The present sculpture was likely cast circa 1880.

Condition Report:
Details are soft along the ridge of the tiger's back with slight variation in patina. Light handling wear to patina throughout, overall remaining in excellent condition. Trace verdigris around base is original. An exquisite piece in fine original condition.