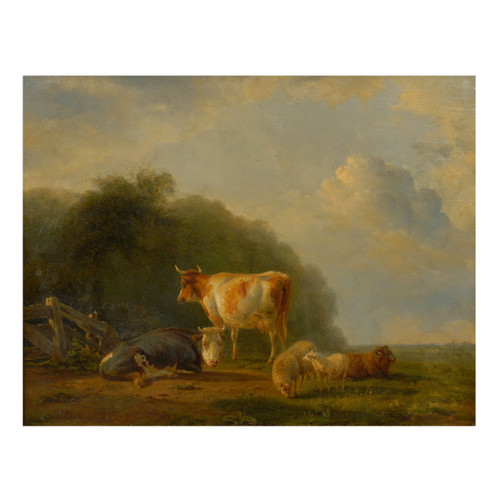 A Pastoral Landscape of Cows and Sheep | Balthasar Paul Ommeganck

A vibrant pastoral scene typical of Ommeganck, the painting shows his notable skill in handling shadows and varying degrees of opacity - not only when cast across the intricate grounds but also in the hair and anatomy of the animals. His finishing work is exemplary, the details brought to life in the background are nearly as interesting as the figures themselves. It is a window back in time, a glimpse at a timeless pasture at the end of the summer day as the sun casts its golden hue across the figures and shadows begin to lengthen. It is executed in oil on a cradled panel and is signed in his typical script lower left "BP Ommeganck".

Born in Antwerp in December of 1755, Balthasar Paul Ommeganck was a pupil of Hendricus-Josephus Antonissen starting in 1767. His landscapes generally focus on sheep and cattle with other animals. During his lifetime he was so successful that all of his productions were purchased before being painted, most of it on commission. Empress Josephine annually added one of his paintings to her collection. He was referred to as the "Raphael of Sheep". His works are rare, prominently featured among the large collections.

In 1799 he won the First Prize in painting in Paris, even though he had no intention of actually competing for it. The work in question - a decorative panel for a piano - had been sent to the competition by a friend. In 1814 Ommeganck was part of a delegation sent to Paris to bring back works that had been ceded to France following the wars of the Republic and the Empire.

Many artists imitated his work, including Carpentero and J. P. Lenzeh. Though modern criticism has on the whole neglected his pastoral work, he is nevertheless recognized as one of the precursors of Romantic landscape. His evocation of atmosphere was achieved less through anecdotal reference to the subject or its 'mise en scene' than through a skillful analysis of the subtle inter-plays of light. His combinations of delicate grays gave a melancholy character to his landscapes, while he used gentle highlights of gold to convey an atmosphere of serenity. (Source: E. Benezit, Vol. X, Lexicon of the Belgian Romantic Painters)