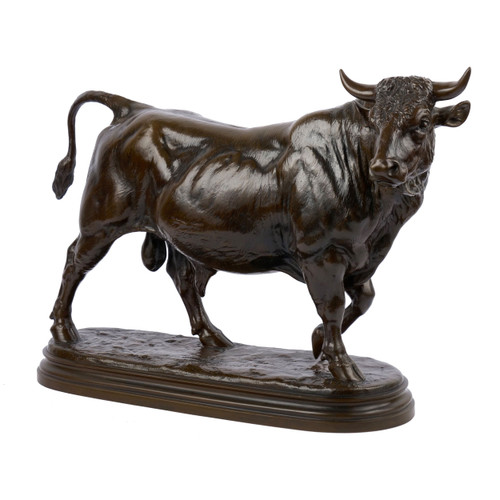 VIEW OTHER WORKS BY Bonheur, Isidore

A rare and exquisite model of a "Striding Bull" by Isidore Jules Bonheur, the work depicts a bull stopped in mid-stride as something in the viewer has caught its attention. His leg is crook'd and his hoof held aloof in the air as his intimidating gaze is firmly set. Every aspect of the creature breathes power with rippling muscles and taut tendons are brought to life in the extraordinary texture of Bonheur's model.

Cast by his brother-in-law, Hippolyte Peyrol, and marked as such with the tiny cold-stamp to the base edge verso, the quality is remarkable. The craftsmanship is self-evident in the casting, the chiseling of the surface leaving the model without flaw and the patination a complex amber-brown with hints of black that is silky to the touch.

This is a difficult model to find on the open market. Cattle were a passion of Bonheur and the present model is one of several examples of striding, standing, running and charging bulls he captured in his sculpture. It is an inordinately fine example of Bonheur's ability to depict the raw power, movement and careful balance of these noble creatures.