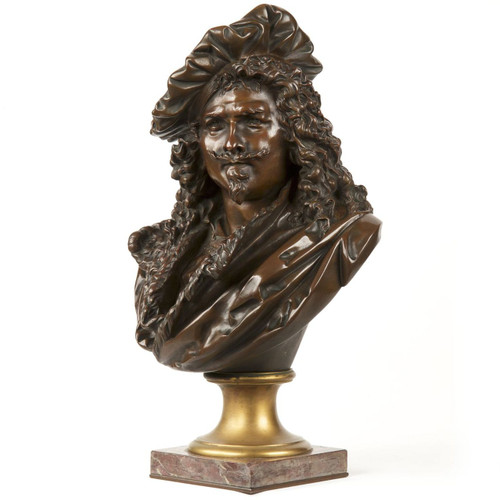 VIEW OTHER WORKS BY Carrier-Belleuse, Albert

This finely detailed bust of Rembrandt van Rijn (1606-1669) is after a model by Albert Ernest Carrier-Belleuse.  For a long period, Albert Carrier-Belleuse carved beautiful busts of highly admired political and scientific figures, these being very popular during the Romantic era through the end of the nineteenth century.  Rembrandt is intricately detailed with his flowing locks over the twists and flops of his intricate garb. Signed on the back of the bust, it is likely a work executed shortly after Carrier-Belleuse's death in 1887, a time when many of these busts were cast by the foundry Pinedo upon request of his widow (Kjellberg, p. 189); note that there is no foundry mark on this sculpture, not atypical for his works, but the execution is above reproach.  It is notable for the incredible detail and finely chased and filed surface, each lock of hair perfectly formed and the whole finished in a wonderful deep brown patina.  The skin is smooth and perfectly cast, the soft ripple of the flesh almost lifelike in it's subtle impressions and variety of patination.  The sculpture rests over it's original gilt bronze socle on a pink marble base with a gilt bronze rim.  It is preserved in nearly pristine condition, the only real blemish being the light chip to the edge of the marble base.  For anyone with exacting taste demanding exceptional quality in their furnishings, this is a positively exceptional work of art.

ALBERT ERNEST CARRIER-BELLEUSE:
Albert Ernest Carrier-Belleuse apprenticed as an engraver at age thirteen beside the goldsmith Fauconnier in Paris, later being accepted into the Ecole des Beaux-Arts based on the endorsement of David d'Angers in 1840. His training became evident in his later work with bronzes, the minute and exceptional attention to small details required as a goldsmith eventually would give depth and life to his romantic sculptures. Exhibiting a keen interest in porcelain, he was eventually named the director of Works of Art at the Sevres porcelain factory in Paris in 1875, many of his works being then interpreted into painted scenes manufactured by the firm. Some of the most treasured works by Carrier-Belleuse is the extensive quantity of busts he produced, these capturing famous and less-than-famous artists, poets, musicians, writers, politicians, financiers and merchants of the time. Nicknamed the "Clodion of the 19th Century" both by his contemporaries and by Napoleon III, his romantic treasures were highly regarded and resulted in him being commissioned for many public monuments during the Second Empire. His work is prominently listed and catalogued in most major works on bronze sculptors of the period.

Condition Report:
Exceptional condition, patina in fine state of preservation. Chip to front right edge of marble base with roughness around all sides.  Gilt socle oxidized.  Some dust in crevices.