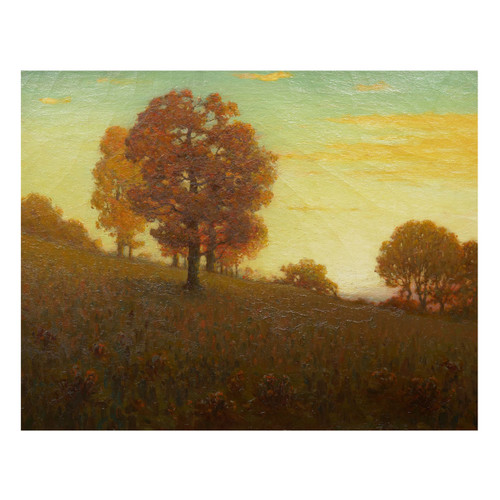 A fine Impressionist landscape of a quiet hillside covered in a sea of grasses and intermingled wild flowers surrounding a single tall tree at the forefront with leaves changing with the seasons. The sky is a spectrum from red to pale blue as the setting sun dims behind the trees in the distance. The unsigned work is labeled in period graphite verso "From Clark S. Marshall" and is executed in oil on canvas, housed in an attractive period frame refitted for this work.

A native of Talbot County on Maryland's Eastern Shore, Marshall became a highly regarded landscapist, painting mainly in the impressionist manner. Solo exhibitions of his work were held at the Peabody Institute and at The Baltimore Museum of Art. A student at the Corcoran School of Art in Washington, he later exhibited at the Corcoran Gallery of Art. Around 1918, Marshall turned to the ministry with charges in Cecil and Caroline Counties as well as in Delaware. Throughout the latter part of his life, he continued to paint, favoring evening and moonlight views of his native Eastern Shore.