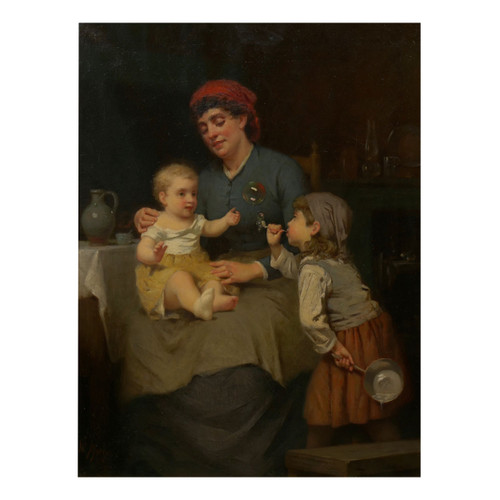 A heartwarming interior scene, it cheerily captures a young girl blowing bubbles from her pipe to entertain her infant sister while neglecting the pot of water that pours out on the bench behind her under the tolerant bemused eye of her seated mother. With broad and vigorous brush work, the scene is vivid and full of movement with rich color throughout the figures. The background is simple with bottles, plates, accessories and an oil lamp resting on a green chest in the translucent shadows while the table in the foreground is set with a tiny dish and water jug.

Rich and expert, it is a very fine example of Morgan's work. The piece is housed in an early and exquisite carved giltwood frame.

Born in 1826 to a London tradesman, William Penn Morgan was sent by his father to Paris at fourteen to study in the atelier of Thomas Couture where he studied academic art by copying Old Master paintings and thoroughly immersed himself in the pursuit of painting. He furthered his study at the government art school in Le Havre.

Sensing a lack of progress and fearing the prospect of returning to England as a failure, he abandoned art and instead worked the late 1840's as a sailor before eventually arriving in Brooklyn, New York in 1851 penniless and without a career. Initially supporting himself by taking up work as a draftsman, Morgan began studying at the National Academy in New York from 1853 through 1860, though in later reflection he admitted his study was somewhat aimless and without discipline. He began submitting paintings to the annual exhibitions as early as 1852. The Academicians of the NAD described Morgan "as a painter of 'sterling merit' whose treatment of subjects 'reflected the sensitiveness and refinement of his own nature' ". (Dearinger).

While he produced a great number of portraits, he is best remembered for his intimate interior scenes - many capture mothers with their children or young girls and boys engaged in smart play: reading, leading, painting, creating. As in the present work, many of his paintings centered around bubbles with depictions of children blowing bubbles, manipulating bubbles with sticks and pipes,

Beyond his exhibitions at NAD, one of which remains owned by NAD and is held in the Smithsonian National Portrait Gallery, Morgan exhibited at the Pennsylvania Academy of Fine Art in Philadelphia from 1885 to 1888, the Brooklyn Academy of Art from 1875 to 1884 and was a member of the Artists Fund Society. He was elected to membership as an Associate of the National Academy of Design in 1865.