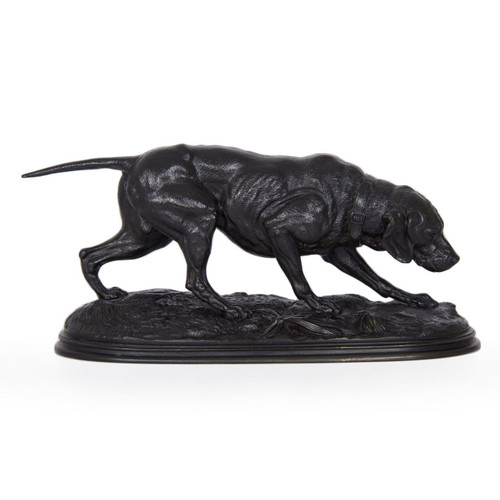 Bronze Sculpture of a Hound Dog by Paul Delabrierre

Exquisite chiseling and detailing throughout the surface of this bronze model of a hound dog bring the subject to life, his fur finely chased and even the tiniest details in his claws finely finished.  It is acid patinated to a nearly black hue and finished with a burnished beeswax.  The naturalistic base is fully developed with long blades of foliage scattered over the rocky ground, the front corner of the base signed in his tidy block script E DELABRIERRE.

Very little is known about the life of Paul Edouard Delabrierre beyond the extensive body of work he left behind.  He was born in Paris on March 29th of 1829 and studied under the painter Jean-Baptiste Delestre.  Following closely in the steps of Antoine-Louis Barye, though doing less to push the boundaries of Realism than his counterpart, he produced a varied collection almost exclusively focused on animal subjects, these focused more on anecdotal moments in nature than on the anatomical exactness of the animals.  He made his debut at the Salon in 1848 and continued exhibiting through 1882, almost exclusively presenting animal studies.  His most important public work is the large composition in stone entitled "Equitation" as a pediment for the facade of the Palais du Louvre.