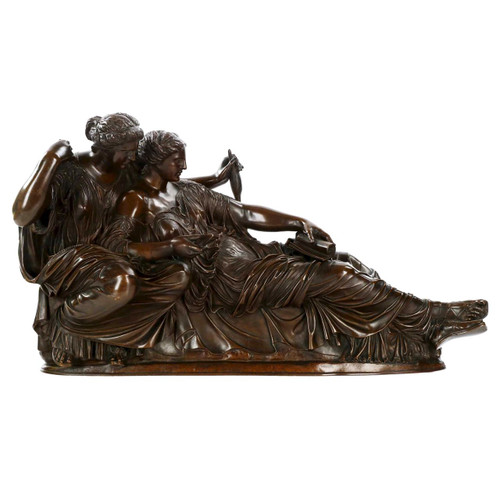 A bronze sculpture with a graceful presence and of excellent quality, the work is based on the original sculpture in the east pediment of the Parthenon by Athenian sculptor Phidias, while Clésinger filled in the missing extremities of the scene for a full subject.  It depicts Aphrodite lying in the arms of Artemis, clasping in her hands a scroll of parchments and a pair of scissors, while Artemis shields them from the wind, pulling his garment over his shoulder while holding a spindle of wool in his other hand. The work is catalogued in Barbedienne’s 1886 catalogue as “La reduction aux deus dix.” and was originally offered for 425 francs.

Remaining in very fine condition, this is a powerful subject for anyone passionate about classical works in bronze - exquisitely cast, it makes a most fine collection strike point.

Born Jean-Baptiste, but later choosing to be known as Auguste, he was a student of his father, the academic sculptor George Philippe Clésinger. Later studying under sculptor Thorvaldsen, a Danish neoclassical artist whose influence is clear in Clésinger's subjects, he also studied under architect Salvi and briefly under David d'Angers. A somewhat distracted and highly ambitious spirit, Jean-Baptiste moved around from Switzerland to Florence and in 1845 settled in Paris. He was aggressive in making connections and arranging proper critical acclaim for his works, an effort that paid off in his 1847 debut of Woman Bitten by a Snake, a moving Romantic work that created a sensation among critics. He was awarded first-class medal at Salon in 1848 for his Reclining Bacchante and was awarded membership in the exclusive Legion of Honor in 1849 - later he was promoted to officier in 1864. While he also worked to market his own works, organizing public auctions and publishing a catalogue with Théophile Gautier in 1868-70, much of his work was cast by and promoted by the Ferdinand Barbedienne foundry. The firm's 1867 catalogue features Clésinger's work prominently and the majority of works executed during his lifetime bear the stamp of this founder.