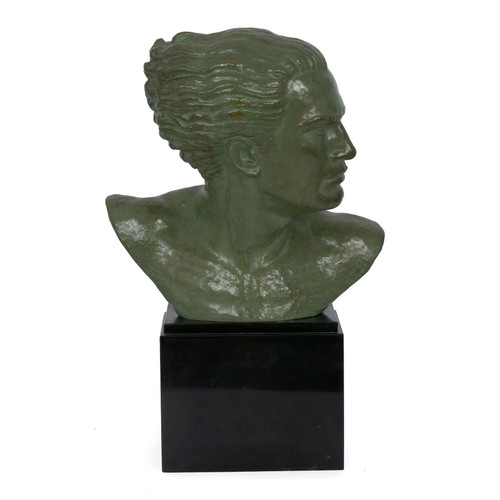 A powerful bust in honor of courageous Aéropostal aviator Jean Mermoz (French, 1901-1936), this moving sculpture was executed in bronze with a cold-painted verde surface patination by Lucien Gibert.

Born in 1904, Lucien Gibert studied under his father, a cabinetmaker. He studied at the Ecole Nationale Superieure des Beaux-Arts in Paris under Jean Boucher and started exhibiting at the Salon des Independants in 1923 under the guidance of Charles Despiau. His preference was for unconventional art, often working with stone and marble directly. He received numerous public commissions, including two monumental sculptures for the Charléty Stadium in Paris, as well as two-hundred medals for the Monnaie de Paris.

The bust is beautifully cast with a hammered and textured surface over exquisite chiseling and filing of the surfaces throughout. It is set over a polished black slate stepped base rather typical of the period, the front upper edge signed GIBERT while the reverse of the bust is also signed GIBERT and cold-stamped BRONZE.