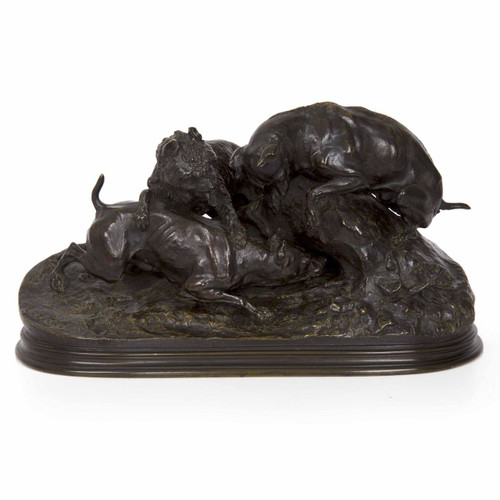 This exquisite bronze hunting group captures a trio of dogs excitedly congregating around a small hollow within which a rabbit is presumably hiding.  It is one of Mene’s most sensitive and popular hunting scenes, the dogs more playful and inquisitive than actually on a serious hunt - tongues are wagging and tails are tense as the more brave of the terriers probes his nose under the outcropping.  It fully displays the intelligence and curiousity of these animals.  This is a rather early casting of this scene, one that we have carried in the gallery many times now.  The details throughout are simply exquisite, this being most obvious in the sharp nails and fine chiseling of hairs - the Griffon has a beautifully modeled shaggy coat in perfect realism.  Foliage and scattered rocks line the naturalistic base where Mene’s signature is very crisply worked into the cast - it is actually the best signature we have seen on this model thus far.  The work was first presented as a wax model at the Exposition Universelle of 1855, then again at Salon in 1872 as a bronze model.  It is catalogued in Mene’s catalog as No. 24 with original dimensions of 20 cm height, 37 cm length and 18 cm depth and an original cost of 250 francs in bronze and 350 francs finished in silver.  After his death in 1879, the rights to Mene's models were purchased by Susse Freres, the foundry that put forth a great number of his pieces in the last quarter of the 19th century.  A portion of his models were purchased by Barbedienne and slightly later models of this subject are often found cast by Barbedienne (generally circa 1880-90).  It is a very worthy acquisition for the serious collector of fine Mene models, this work being held in the permanent collection of the Louvre (Paris), Museum of Marseilles (France), Carnavalet Museum (Paris) and the Musée d’ Orsay.

Condition Report:
Original patina with only very light handling wear (ridge of terrier’s back).  Some dustiness in crevices.