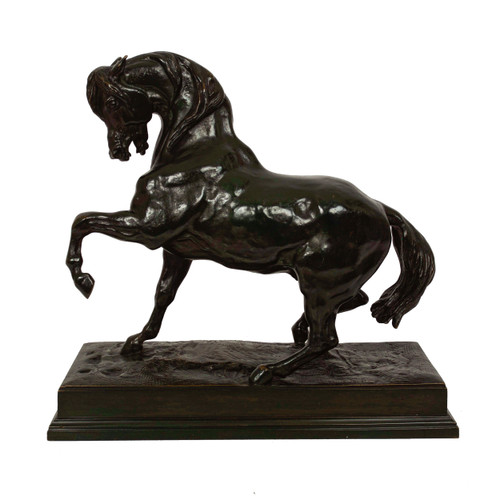 A very fine posthumous edition of Barye's Cheval Turc no. 2, it is one of the most powerful Romantic models and the pair to this model (same horse but with the other leg lifted) was chosen by Jane Horswell as the cover for her volume Les Animaliers, ultimately becoming one of Barye's most well-known sculptures. It is a mysterious and alluring subject in the spirit of Delacroix and Gericault, the contours of the rearing horse endlessly cursive and serpentine as his back arches softly and his head is lowered in agitation. His gate is suggestive of perhaps backing away from some threat in his path, the sharpness of his reaction captured in the whip of his mane and tail in the opposite direction. Examples of this work are held in the permanent collections of the Baltimore Museum of Art, the Walters Art Gallery, the Corocoran Gallery of Art, the Metropolitan Museum of Art, the Fogg Art Museum, the Brooklyn Museum of Art and the Wadsworth Atheneum.

This model was acquired by the Ferdinand Barbedienne foundry during the auction of Barye's sculpture in 1875 and was produced by them until the turn of the century, thereafter as Leblanc-Barbedienne through 1925. The present model is a fine edition with a beautifully textured and modeled figure with an even patination that at first appears black but unfolds the more it is examined, revealing a complex green and brown undertone throughout the entire surface. The underside is finished in a bright gilding and is incised faintly beneath the gilding "No. 708" and "No. 1", more clearly incised "44", cold-stamped "BB" and written faintly in ink "4057" along with another illegible inscription. It is signed in the cast "BARYE" to the base just beneath the tail and incised F. BARBEDIENNE Fondeur behind the hoof.