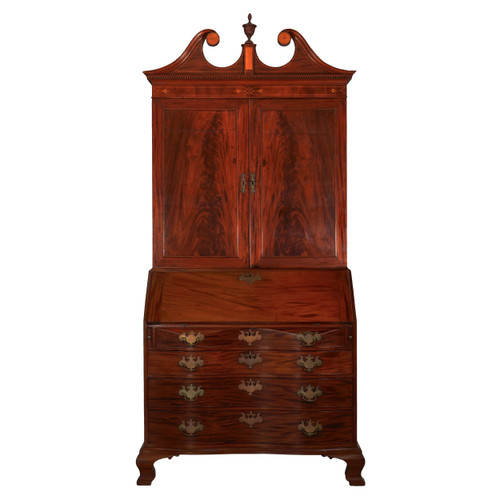 The crown is self-contained and lifts off of the bookcase, this crafted with open dovetails at the rear corners and affixing to the bookcase with screws. The swan's neck pediment is beautifully molded with an intricate patera pinwheel motif flanking a later finial with carved waterleaves under repeating beads. The tympanum is inlaid with light-and-dark cylindrical motifs and is situated over dentil molding. A distinctive display of intertwined-diamond stringer inlays and symmetrical bellflowers relates closely to a group of furniture produced in Salem during the same period.

Both doors of the bookcase are veneered with a vivid figured mahogany, this with shrinkage cracks and ripple from changes in the wood over time. These open to reveal an upper row of ten pigeon-hole document slots over three adjustable shelves.

The lower case features a fall front lid that lays firmly on a pair of sliding lopers, these with brass pulls and the same cockbead molding that surrounds all drawer fronts. The lid operates over early and likely original brass hinges to reveal an orderly interior with four pigeon-holes on either side surmounted by scalloped valences over a pair of short drawers over a single broader drawer flanking a light-and-dark stringer inlaid prospect door and document drawers.

The desk facade has a vigorous "oxbow" form, the faces of each drawer cut from planks of solid mahogany cut to create the undulating curvature of the chest. It is raised over original ogival bracket feet. The backboards of the entire piece are untouched with a delightful nut-brown oxidization throughout the framed panel construction. The back feet show an interesting dovetail configuration in locking the triangular brace to the facing.

Condition Report:
Surface cleaned and perhaps refinished during the 20th century; overall with excellent color throughout. Left arch of broken-scroll crown with numerous repaired cracks. Finial replaced. Small portion of molding along lower edge of crown replaced and minor shrinkage cracks in veneers of crown. Ripple and shrinkage cracks in the doors. Replaced strip running the width of the inside of the desk where hinges likely pulled out at one point. Small loss to front-right corner molding on the top of the lower section around the bookcase. Apparently original brass hinges and batwing brasses. Replaced valences on upper pigeon-hole slots in bookcase. Triangular patch to left corner of fall-front. Top edge of left loper cockbead molding missing. Minor cracks in foot facings. Front left foot facing with a 1" patch.