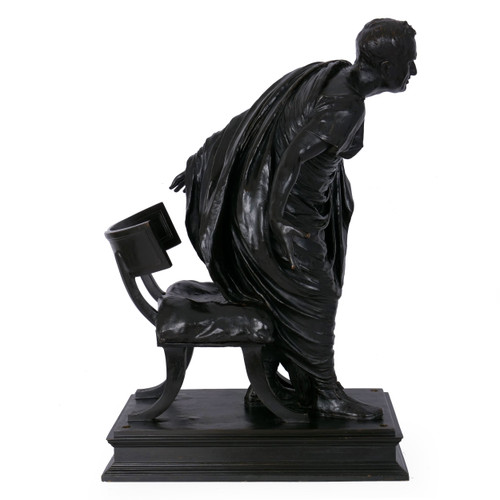 A powerful historical work that depicts the 63 B.C. speech of Marcus Cicero before the Roman Senate accusing senator Lucius Catilina of a conspiracy to murder Cicero and other senators in an attempt to overthrow the government of Rome. Before the senate, Cicero attests that he rose from his seat and declared "Quo usque tandem abutere, Catilina, patientia nostra? Quam diu etiam furor iste tuus nos eludet? Quem ad finem sese effrenata iactabit audacia?" - "For how much longer, Catilina, will you abuse our patience?".

A vivid and rare look into the ancient politics of Rome, this fine sculpture captures the drama and intensity of the moment with Cicero rising to the moment with earnestness. His toga swirls about him with chaotic vigor, his brow deeply furrowed and his eyes filled with conviction while his arms are stretched behind him in frustration. Alfano's ability to capture the subject in a way that conveys such a palpable tension is notable.

The work is signed in script on the cushion of the klismo chair "V. Alfano" and "Napoli". It is finished in an original black patina with worn highlights to the relief, all sealed and polished under wax.

Condition Report:
Light wear to patina, particularly with relief to raised elements. Scratch to patina on front right corner of base edge. Intended to be affixed to a base with bolts, these since absent. Excellent original condition, polished and waxed, a fine presentation.