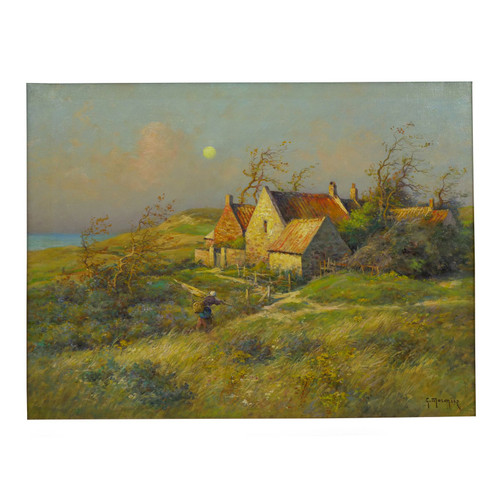 A moving scene typical of his blended work, the painting captures a young peasant woman walking through fields of grasses to her cottage beside the sea.  The moon hangs low in the sky while the sun sets behind her, creating a beautiful "golden hour" effect throughout the warm scene.  The work is signed lower right in his very distinctive script.  While a large body of his work focused on marine scenes, he refused to be known as a maritime painter and broke with these traditions by incorporating local life, sweeping landscapes and figural realism into his paintings.  The luminescent use of shadows, the hidden sun and translucent elements like the grasses of the foreground to tell a compelling story is a hallmark to his work.

Born in Douai, France in 1865, Georges Maroniez studied law while also taking courses at the Ecole des Beaux-Arts under Pierre Billet. After finishing his studies, he pursued a career in the judiciary concurrently with his painting, where he focused on peasant genre scenes. These often centered around coastal life, port scenes of Flemish fishermen and life by the sea. He became particularly effective at dusk and twilight scenes, using translucent light to create drama and romance in his work.

As his career in painting was beginning to blossom in 1905, he resigned from the judiciary to focus all of his efforts on his art. He further achieved success as a landscape photographer and in 1891 designed and patented a camera he called “The Sphynx” that he used to photograph scenes throughout the Middle East, Mediterranean and North Africa. He would also work with the camera for landscape studies that would later be reproduced in his studio on canvas.

In 1914, Georges was drafted into the Great War and was separated from his family. As the Germans occupied North-East France, his wife was held hostage in the Holzminden internment camp of Lower Saxony through the ceasefire. Reunited, they moved to Paris in 1919 where he opened his studio and painted until his death in 1933 of a heart attack. Over 800 paintings are attributed to Maroniez, along with over 1600 photographs on glass held in the permanent collection of the Cambria museum.

Condition Report:
Professionally conserved: relined, cleaned; spots of touch up around extreme edges (mostly isolated to upper and left edge), spot of inpainting to the right of signature (lower-right), other minor spots of touch up. Light surface craquelure. Contemporary frame.