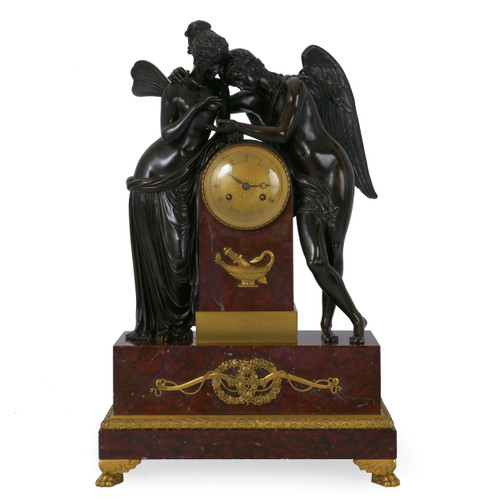 An exceptional French Empire period mantel clock with finely chiseled elements throughout, this work captures Psyche placing a butterfly (now absent) into the open palm of Cupid.  Each figure is cast with incredible skill, this self evident in the difficult areas: the finishing of hair, eyes, finger nails, feathers and feet.  They flank a dome top housing with a bronze dial decorated with a wavy engraved background and raised relief repeating anthemion around a beaded ring before the chapter ring of ebonized Roman numerals behind a domed glass door.

The ormolu elements are typical motifs of the period: an oil lamp with a serpent’s head before a short dagger; and the primary motif is a pair of floral wreaths interwoven with Cupid’s bow, the strings left loose and the bow unstretched.  It is a powerful example of the period designed close in form to the more common “Psyche Crowning Cupid” example.

The body rests over gilt bronze animal paws with winged returns. The reverse of the clock movement is covered in an original brass ring that is spun slightly to remove and give access to the workings. The movement is entirely original and is presently functioning beautifully, retaining the original pendulum and period bell.

A timepiece that perfectly balances the powerful elements of the Empire period against a sensitive treatment of the mythological subject matter, this fine sculptural work of art expresses expertise and demanding attention to detail in a host of crafts.

Condition Report:
Original movement in excellent condition, professionally serviced and currently operating in the shop - note, we do not guarantee movements will operate smoothly without being serviced upon receipt by a professional. Faded numerals on chapter ring. Nut securing the bell in the movement is replaced. Small chips to the marble base throughout. Missing the butterfly. No original winding key, but a modern replacement will be included.