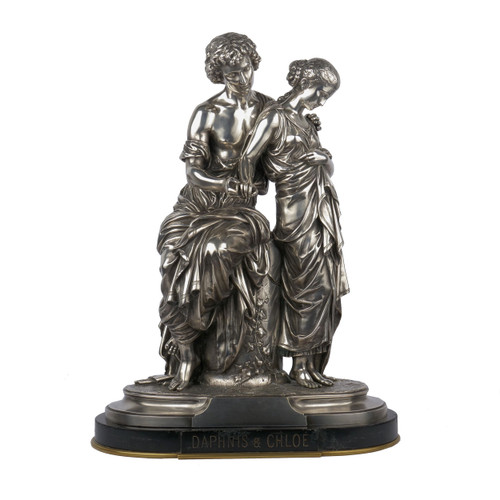 An unusually fine and rare model of Daphnis et Chloe after the model by Mathurin Moreau, the model depicts the Greek tale of the two children, each abandoned by their birth parents and raised by farmers. After finding one another, the adventure of their lives takes them apart and through many trials before finding one another again and living out their days quietly in the countryside.

The present model is an exceptional example of Mathurin's ability to convey the very essence of Romanticism in a way that is timeless. The figures are exquisite, each flawlessly cast with fine chiseling of the details throughout.  Careful attention to even the smallest elements is typical of his work during the period, where eyelids are carefully developed and each fingernail is perfectly replicated in the wax prior to making the mold. The naturalistic base is signed in the wax prior to casting "MOREAU" and has been beautifully captured by the lost-wax pour of the bronze. It rests over the original black slate base incised with the title of the work.

This is a rare find on the open market, most often cast in a medium brown surface patination. The silvered surface of the present model is to a very handsome effect.

Condition Report:
A fine original silvered patina with oxidization. Some dings and abrasions, more notable around the base edges. Slate plinth with old repaired crack to underside and chipping/blemishes around sides.