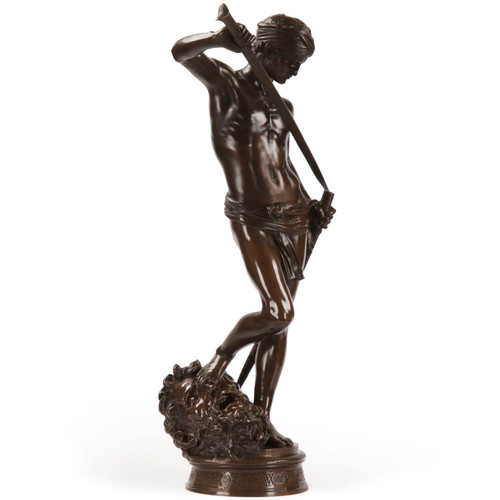 Also known as "David with the Head of Goliath", this very fine sculpture not only won a first class medal but also resulted in Mercie being honored with the Cross of the Legion of Honor, the only artist ever to receive this distinction while still a student at the French Academy in Rome.

Documented extensively, this is one of his most famous and most treasured works and was cast by Barbedienne in numerous edition sizes, five of which are noted in their 1886 catalog - 110, 92, 73, 46 and 29.5 cm. The present example is  87.5cm and was cast such that it would rest over a flanged plinth if desired so that it could spin and show from every angle.  The original sculpture, cast in life size for the 1872 Salon at a height of 185cm (72.5") is held by Musee d'Orsay in Paris; other examples held by museum include a 69 cm example at Montpellier and a 70 cm example at Troyes.

Exceedingly attractive, the sculpture exhibits a realism of a nearly photographic dimension. The young David is portrayed lifting the vast sword of Goliath into it's oversized sheath as he has just parted the head from it's body, his foot still disrespectfully perched in Goliath's eye. The form exudes a certain carefree and relaxed demeanor, not exemplifying a warrior who has just defeated a man two or three times his size, but rather a cool air of confidence having done a significant deed. Goliath's head is breached just above his right eye where the stone of David's sling struck him. David's handsome and clean appearance is a stark contrast to the course and unkempt appearance of his fallen foe.

Mercié's focus on a youthful subject of David is typical of many neo-Renaissance sculptors operating in the third quarter of the 19th Century - distinctive to the subject is his portrayal of David with a composure that is relaxed and almost nonchalant.  While the Masters of the Renaissance sculpted the story of David's conquest of Goliath with emphasis on the miraculous nature of the fight, Mercié depicts David calmly tucking away a sword with utter calmness as if completing a routine task on a normal day.  The result is a subject that is intriguing and absolutely magnetic.

The patina is a rich blend of browns, blacks and reds, overall in excellent presentation ready condition.  The sculpture is sealed with the A. Collas emblem noting "Reduction Mechanique Collas Brevete", having been reduced in size from the 185cm original using the method of inventor Achille Collas; along the rim "F. Barbedienne, Fondeur Paris" is stamped and the front of the circular base reads "David" in Hebrew. The chased and filed finish work is exceptional, as is the case with most work from the F. Barbedienne foundry.

The level of precise attention to detail is noteworthy, as with more surface to work with the finishing is exquisitely executed.