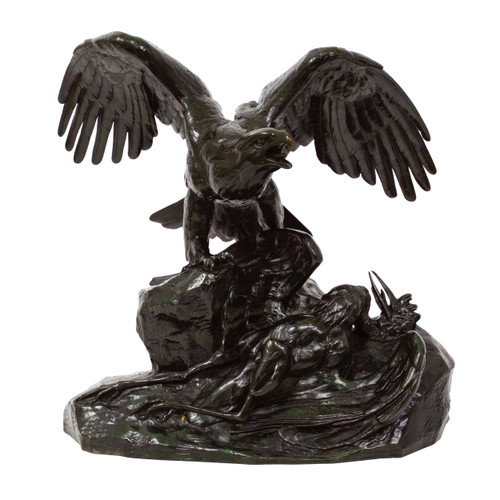 A fine post-humous casting of Barye's Eagle Holding a Heron, the original model seems to have debuted around 1836 but is first documented in Barye's catalogue around 1857 as No. 106 available for 190 francs. By 1862 he had raised the price to 200 francs and in 1865 to 220 francs; it remained at this price for the rest of his life. After his death in 1875, Barbedienne acquired rights to the model and immediately raised the price nearly 30% to 320 francs in their 1877 catalogue. This price held through 1905, at which point it began to accelerate to an ultimate price of 500 francs by 1925 under the Leblanc-Barbedienne partnership.

There were two versions of this model - the first has the eagle facing more towards the left while the second version, the same as the present model, captures the eagle facing the heron. While the piece is not marked with a foundry signature, it is highly likely it was cast by the F. Barbedienne foundry in light of 1) the signature gilt wash to the underside, 2) the presence of worn ink inscription beneath the cast that appears to read 320 - many Barbedienne casts include their original price inscribed to the underside of the casting, and 3) the execution of the model and patination is nearly identical to Barbedienne casts of Barye's other eagle subjects handled by the gallery.

The present model traces its origin through the first edition, the left-facing eagle, which ultimately developed from Barye's studies for the French government in 1834. They were initially planning to surmount the Arc de Triomphe with an eagle with a wingspan of 75 feet, grasping in its talons the trophies of war. The project was abandoned out of concern it would offend France's past enemies, but Barye utilized the studies for several models of Eagles with raised wings.

In this model, this powerful predator has swooped down to a boulder that is likely situated at the water's edge. His rear talon touches the wing of the fallen heron in a gesture of possession while his head is raised in defiance, his wings at the ready and his muscles taught for action.

From a technical standpoint, the model is brilliant and a fine achievement, using negative space with great effect; in this scene, the heron almost melts into the background, its feathers almost at one with the boulder above, at first easily missed and at once forgotten. All primary emphasis appears to be on the eagle, the power and pride of the bird on full display; but as the details separate themselves from the rocky base and muddy ground, it becomes apparent that there is a raw brutality to this romanced bird that is often ignored or forgotten.

Condition Report:
Four minor speck losses to patina of right wing feathers - we can tone these in the shop so make them less apparent upon request. Very fine surface throughout in otherwise impeccable condition, waxed and polished.