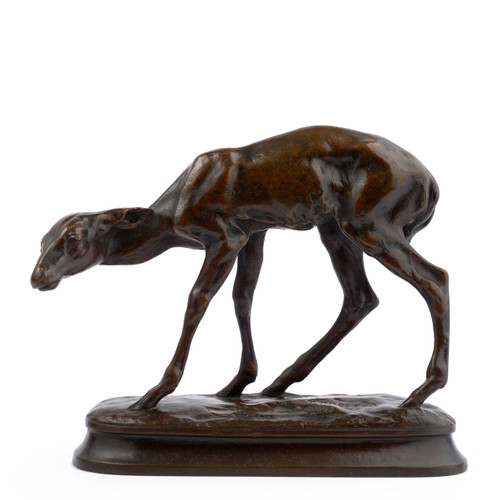 Alexander Phimister Proctor's first model of a newborn white-tailed deer in 1887 titled Fawn (First Model) was inspired by his observations of the animal in the Central Park Zoo (at the time called the Central Park Menagerie) in New York City [see Christies, Sale 16470, lot 106 for an example of this first model]. It drew significant attention and marked a turning point in his career, leading to his first major public commission. He completely reworked that model while in Paris, completing Fawn towards the end of the year in 1893, the result being an inordinately sensitive first look at this timid newborn with ears drawn back and head lowered for balance while finding unsteady footing. The juxtaposition of his wild and unrestrained hunt scenes against such a fragile subject gives evidence of Proctor's sheer range of ability. His ability to translate nature devoid of projected sentimentality elevated him to among the greatest animal and western sculptors of his day.

The present example is finished in a rich and complex brown patina with traces of reds and blacks. The base is signed A.P. Proctor and dated for when it was cast, 1898. It is noted "Copy Rt 95" on the corner and stamped by Gorham Co Founders with serial number OOL on the back base edge. The underside is filled with original plaster and the work remains in impeccable original condition.