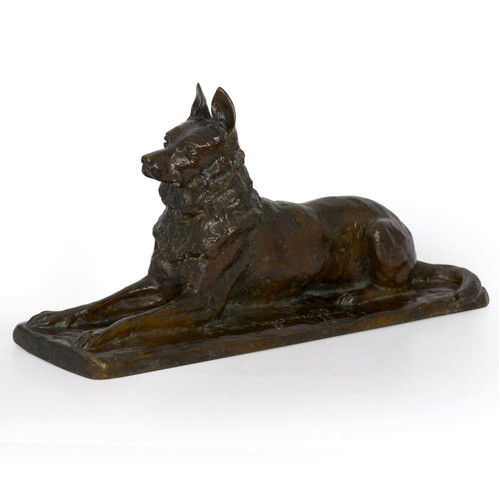 An exquisite lost-wax model of a resting German Shepherd cast by the Susse brothers foundry, the cast is technically very precise, likely a relatively early casting in light of the fine surface detail preserved in the mold throughout.  It is a very attractive representation of the proud canine, his eyes bright and alert and despite his rested posture he remains tensed for action and fully aware of his surroundings.  The back edge is cold-stamped "4" with the tiny Susse cachet, the front of the integral base signed in generous script "P. Tourgueneff" and also inscribed to the reverse "Susse Fre. Ed. Paris" (Susse Freres Editeurs) and "cire purdue" (lost-wax).  It is a relatively rare piece on the open market.

Born in Paris in 1853 or 1854 to Russian parents, Pierre-Nicolas Tourgueneff studied under Emmanuel Fremiet, a tutelage that would have a lifelong impact on his oeuvre.  The body of his work consists largely of animal sculpture, mostly dogs and equestrian subjects, though he also completed several figural portraits of riders on their horses, mostly depicting his military contemporaries and images of the First Empire.  He received honorable mention at the Paris Salon in 1882, 1883, 1885 and 1886 where he was a regular exhibiter from 1880-1911.  In 1889 he won the important Grand Prix at the Exposition Universelle.  In 1903 he was made Chevalier of the Légion d'Honneur. The bronze statuettes cast after his work were produced exclusively by Susse Freres and twenty-four such models were included in their early 20th century catalog; the present model is catalogued by Susse as "Chien de Police" and was issued in two dimensions: 19 cm (7 1/2") high and 10 cm (4") high.

Condition Report:
Handling wear to paw and edges of base; tiny surface abrasion on Shepherd's shoulder (signature side); trace verdigris in crevices; surface carefully cleaned, sealed with beeswax and polished.