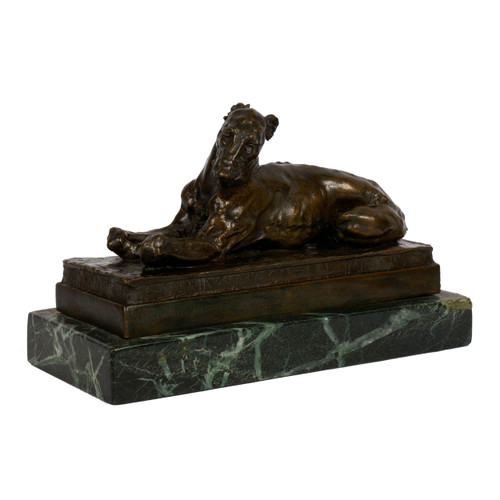 VIEW OTHER WORKS BY Lawrie, Lee

"HAMLET - A CRIPPLED GREYHOUND" BY LEE OSKAR LAWRIE (AMERICAN, 1877-1963)
Patinated bronze over original verde marble base; signed in cast of naturalistic base LAWRIE
Inscribed "Hamlet: a canine whose lifetime was marked by enough valor to have made him immortal; Roman Bronze Works - Cire Purdue, New York"
Item # 008ZGK30S

A remarkably rare model, this very fine study of a crippled greyhound is a notable work for Lee Lawrie. Steeped in the austerity and mechanical minimalism of Art Deco sculpture, as one of the foremost architectural artists of the movement, the uncomfortable exactness of the present model gives us some hint at the sheer range of Lawrie's study. A highly technical work, the photographic realism shows the deeper anatomical understanding Lee brought to all of his work. In some ways a heartbreaking work, the hopeful optimism of the study is clearly outlined in the scratched inscription around the base - an animal that holds his head high despite being dominated by his disadvantaged and hobbled body. It is a picture of strength and determination.

Cast by the Roman Bronze Works foundry of New York, it is inscribed as such along the base and also cold-stamped to the underside of the base. It is worth noting the hand-scratched nature of the inscriptions around the base - these are captured directly from the mold and impressed into the molten bronze as such, not finished or worked after the fact. It is a most moving, the sheer rarity of the model making this a particularly special acquisition.