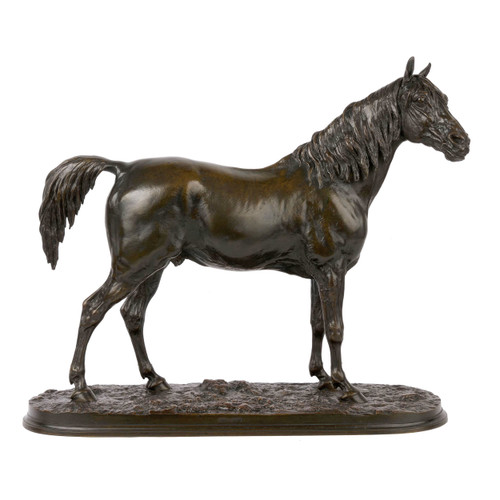 This very handsome sculpture of Ibrahim - Cheval Arabe Ramené d'Egypte is a very fine casting after the model by Pierre Jules Mene depicting the Arabian stallion winner of the French Derby. Originally modeled in 1843 and exhibited at Salon the same year, this study of Ibrahim was Mene's first major equestrian subject and proved to be his most successful. The present casting is posthumous and is clearly cast from original molds, probably circa 1890 but perhaps as late as 1910. Note the later base style and the use of slotted machined screws from the underside to affix the base and the stallion.

Much of the detail in the model is captured directly from the wax model. These details have been exquisitely finished with crisp tooling, hand-filing and chasing throughout which distinguish each lock of hair from the next. Veins running throughout his face, along his belly and the length of his legs are well developed. His rests over an ovular naturalistic base with finished edges along with the cold-stamped title IBRAHIM; it is crisply signed P.J. Mene.