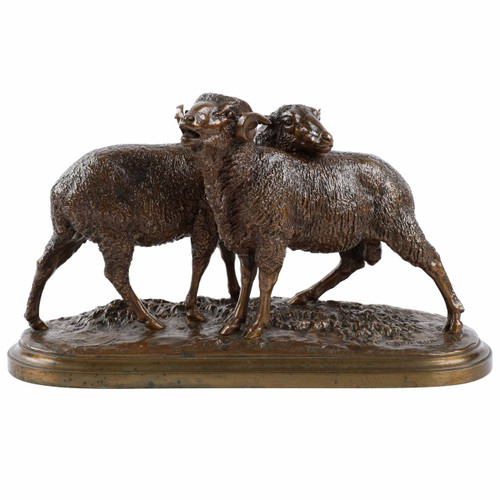 VIEW OTHER WORKS BY Bonheur, Isidore

A fine grouping of a Merino Ram and Ewe, these each were also modeled individually by Bonheur, though this rare grouping is much more effective and striking.  It is a large and crisp sand casting, executed by the Peyrol foundry during the third quarter of the 19th Century.  An exquisitely detailed work, each sheep is perfectly cast with full development of the curls and folds of thick wool; particularly attractive are the finely chiseled faces of each sheep.  The Ewe leans against the back of the standing Ram affectionately as he raises his head in alert bleating.  The base is a gorgeous naturalistic casting with as much care shown to details as the rest of the sculpture; the right side is signed by Bonheur.  A tiny stamping in the edge of the back of the base notes the piece was cast by the Peyrol foundry, a foundry owned and operated by Isidore’s brother-in-law, Hippolyte Peyrol.

Condition Report:
Discoloration from oxidizing around edges of base.  No flaws, exceptional condition.