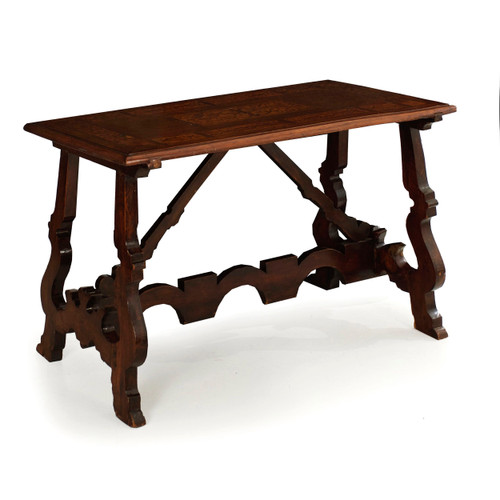 Featuring a fine marquetry inlaid top with wolf figural inlays in each corner, the rectangular top is divided into smaller rectangular spaces decorated with vine-and-foliage displays executed in a lighter fruitwood over the solid walnut top with an integral thumb-molded edge. A pair of battens dovetail beneath the top, allowing it to expand and contract without risk to the wood. The table is raised over a scroll-cut trestle base with pegged tenon-mortise construction throughout, the medial bar and angular supports later replacements.

Vivid, dramatic and preserved in beautiful condition with a rich silky patina throughout, this is a fine presentation piece.

Condition Report:
Numerous spots of loss to inlay in the top as well as several later marquetry veneers. Inactive pest damage. Three toes replaced. Medial stretcher and angular upright braces are replaced - these are likely 19th century and perhaps constituted from another piece, noting the filled holes along the top edge; rounded undersides of medial stretcher are later applications. Old shrinkage splits in the battens (beneath table top).